The Dead Next Door Review 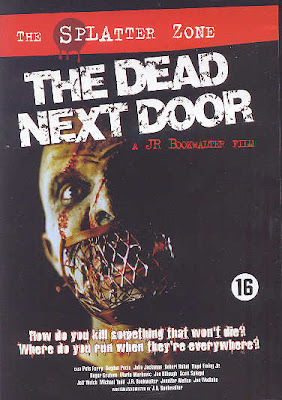 I’m all for Zombie movies, trust me, I love zombie movies. However, The Dead Next Door seems like a parody of a zombie movie, instead of a straight forward zombie film. If you recall my complaints for the movie Jesus Christ: Vampire Hunter, then you will get a feeling for my complaints on this movie.

The movie starts off with an Epidemic, zombies have risen and are eating people left and right. My favorite moment in this movie was right away with some of the greatest interior shots of a video store I’ve ever seen. This movie captures the look and feel of the old time vhs rental shops to a tee and I was definitely proud to be a former video store clerk! The zombie make up is awesome for what appears to be a low budget film, and overall it was cool. I liked the make up and effects in this film, and I enjoyed seeing a mixture of fast zombies and slow zombies throughout the whole film. 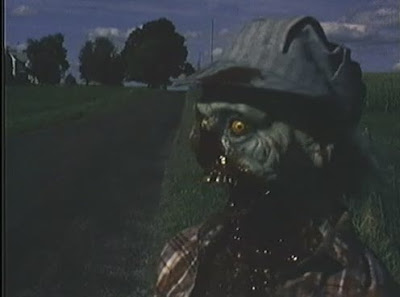 The main plot points revolve around the fact that there is a cure. There is a cure and it involves two powerful serum’s, however the two serum’s are located far apart from each other. The Zombie Squad is called in to transport one of the scientists, aptly named Savini (a tribute to Tom Savini of course).

Here is a trailer for the classic Zombie film The Dead Next Door:


Alright, so the film is horrible in the way that it looks. It was filmed entirely in high 8, and most likely had the original film on vhs tape! It looks that bad, and even the dvd transfer looks like this. I don’t mind crappy movies, as you’ve seen me try to tackle movies like Ax’Em, Jesus Christ Vampire Hunter, and Midnight Skater, but this one made me upset a lot.

I guess I can’t really fault the crew too much. A little investigation shows that Sam Raimi produced this film and the whole crew, cast and workers did it for next to nothing and were acting for free! The coolest part of all this low budget nightmare is that Bruce Campbell does some voiceovers. Oh yeah, the whole film is dubbed over in English, however the spoken language is already English! What he heck! I hate when American films do this, but I guess you kind of have to given that the film was done using old vhs camcorders. (only a joke people, I know the film they used, and I know how they did it, so cut me some slack)

For 1989, this film is not completely trash. Seriously, it is kind of cool to see the gore. I loved that part of this film. Heads exploding, make up effects, and great overall tone and quality, George Romero and Tom Savini would be proud because a lot of the effects rival some of the other Zombie films out there. With recent zombie disaster movies going straight to dvd, I actually started to enjoy this film as my wife was falling asleep next to me. Sometimes you just gotta sit through these things to really appreciate the effort or lack there of that goes into filming such an obvious tribute to Romero.

The Dead Next Door isn’t the greatest zombie film ever, but it does offer up enough of an interesting story to make fans of the genre applaud at the end, even if it is convoluted to say the very least. If you’re a diehard fan of Zombie films, like my favorite podcasters Mailorder Zombie, then you’re probably going to enjoy this one. However, this is a poor example of a good zombie film, but you have to put it into proper perspective. No budget, free actors, and high 8 vhs quality film, if you add those things up, this movie is like the Academy Award equivalent of home made zombie flicks. Why not? Check out The Dead Next Door if you’re a zombie fanatic, otherwise, maybe just take my word for it as a misstep in the genre. This one really put Akron, ohio on the Zombie map, that's for sure.