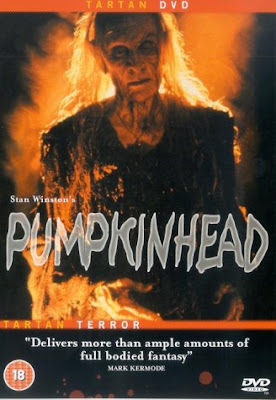 When I was a kid I had to beg to watch horror movies. I remember one day I was sick and my mom felt bad so she took me to the video store to rent some movies. The vhs tapes that I picked were Wrestlemania V and Pumpkinhead !

If you don’t remember Pumpkinhead, I don’t blame you, this movie was not exactly a big ticket Hollywood item. The movie revolves around a group of young people that go out to a remote cabin. During one day they are horsing around and riding motorcycles when they accidentally kill a local kid. The father is so distraught that he visits a witch who exhumes the monster Pumpkinhead and the young visitors never saw it coming! Pumpkinhead is a revenge horror flick, and it is low budget, but it has some good kills, some great spills, and a short enough premise to allow even jaded fans of horror a good time.

Here’s a trailer for the cult classic Pumpkinhead:


The movie doesn’t hold up well. It is somewhat grainy, and even remastered versions aren’t exactly crisp. Sure, it’s not as horrible as some other horror movies, but it is tough to watch this one again. The main problems that I have with the film quality is the lack of lighting on certain scenes. It really does look amateur at times, and that might be because the budget wasn’t all that high.

Beyond the looks of the film, it is a juvenile effort to cash in on the growing horror movie demand of the late 80’s. Sure it had some good plot points and the rubber suit monster is awesome, but it’s not enough to really engage you very much. It is not a very long film, and that is something great that it has going for it. However, the idea of a voodoo monster that comes to take revenge just doesn’t really pan out too well for me, and while Pumpkinhead was a childhood favorite, it’s not exactly something that I want to watch again and again. Pumpkinhead spawned many sequels, and all of them are horrible. This one is the strongest entry in the franchise, but that’s not saying a whole lot.