The Search For Rob Zombie's Halloween 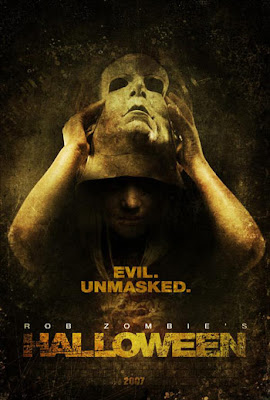 This weekend I managed to watch a horror movie, but it was overshadowed by what I am titling today's post as "The Search For Rob Zombie's Halloween". This weekend my wife and I were out as usual, and we were at a used book store. We sold all our leftover inventory from half.com and ebay and got a measly 12 dollars. We used that to purchase a few christmas presents in the form of massive books for my kid sister. I'm trying to push her to read more, so I bought her some stuff from the horror genre with my favorite authors classic writing style. (Stephen King) We then ventured forward to FYE, Target, and Best Buy to search out Rob Zombie's Halloween. Needless to say that we struck out on all accounts for different reasons.

FYE - I hate FYE because they were really rude to my mother in law about returning something they said that she could return. It all worked out, but it was a stupid situation and FYE didn't fulfill their customer service promises without ease. So I don't really like going there. Besides their crappy customer service, I don't like their prices. A lot of stuff is way overpriced and while you might find some deals with used merchandise, a lot of their new items are just priced way too high for anyone's good. They didn't have anything from Rob Zombie in the form of dvd, and had only one copy of the Original Halloween. We weren't after the original, we wanted the new one. So we left.

Target - Target usually has a mediocre selection of dvd's but when they do have something that I want it's usually cheaper than most other places I go to. They had Rob Zombie's Halloween on sale for $13, and they were all sold out! This is the first time I've ever really wanted to buy a niche market dvd that a chain store carries and find it sold out upon arrival. It must have been the price point, since $13 is less than even Amazon charges for the same dvd.

Best Buy - I like to clown on Best Buy, but when the chips are down, they have what I want at a price that is somewhat reasonable. I don't like the way the store smells, and my wife hates the way the Best Buy near us is sprawled out with no real reasoning. Best Buy had several copies of the unrated 2-disc director's cut of the film but they wanted $29.99 for it! That's just too much to pay, considering that we just saw that Target was selling it at $13. We looked around for a single disc version and just never found it, and we eventually just left.

Dejected, we went home empty handed and didn't give it another thought. I checked Amazon when I got home and they had it for 13.99 which was not a bad price, but then there was shipping costs. I didn't want to get too close to paying $20 for this dvd, as my budget doesn't allow much wiggle room when it comes to entertainment purchases. So we just forgot about it.

The next day (Sunday) we went to church. We try to go to church each sunday, and you readers might be surprised to find out that I'm a Protestant Christian. Yeah, weird for a horror movie fan, but yes, I am a Christian. Church was ok, and is nicely situated next to a supermarket, so we went to the grocery store and found a diamond in the rough. They had Rob Zombies Unrated Director's Cut of Halloween, and it was $13!!! So we bought that, and a gallon of milk and we called it a day.

I never thought that finding Halloween would be so difficult. Considering that it's the end of September and it wasn't exactly the most critically acclaimed film of our times, I thought it would be in stock and relatively cheap everywhere that I went. It wasn't. I reviewed Rob Zombies Unrated Halloween dvd in a previous post and I liked it enough to buy it. Take a moment to read my review of Halloween, and maybe purchase it for yourself, it's not THAT bad.


Looking for grindhouse, horror, or sci-fi films? Please check out our amazon astore featuring all things horror. Don't trust astore? Check out amazon.com, surprisingly they have more grindhouse,horror,and rare sci-fi than you may not have thought possible.
Posted by Jay dune