For literary fans, you’ll already know that the future is not fun. Whether you choose Bradbury or Asimov, or just about any writer that talks about science fiction, the future is going to be awful. Then there is the mighty cinema world, and you’ll find that the horror movies, and stories that are lifted from the science fiction world as well, point towards a future that just isn’t fun.

There are a lot of movies that deal with the future, and I have even been toying around with making my thesis fit the mold. When cycling through movies to watch, and you want to set a theme, there are a handful of movies that you have to watch in order to get a feel for this notion that the future is going to be grim.

The following horror movies and cult classics show a future that is not good, but that’s ok, because there’s hope for a brighter future in iconic characters, killer sets, and pure frenzy. You think “The Purge” had some screwed up moments, check the following movies for absurdity, or perhaps a future that is just not worth living in. (Don’t do anything drastic, this is just a blog) 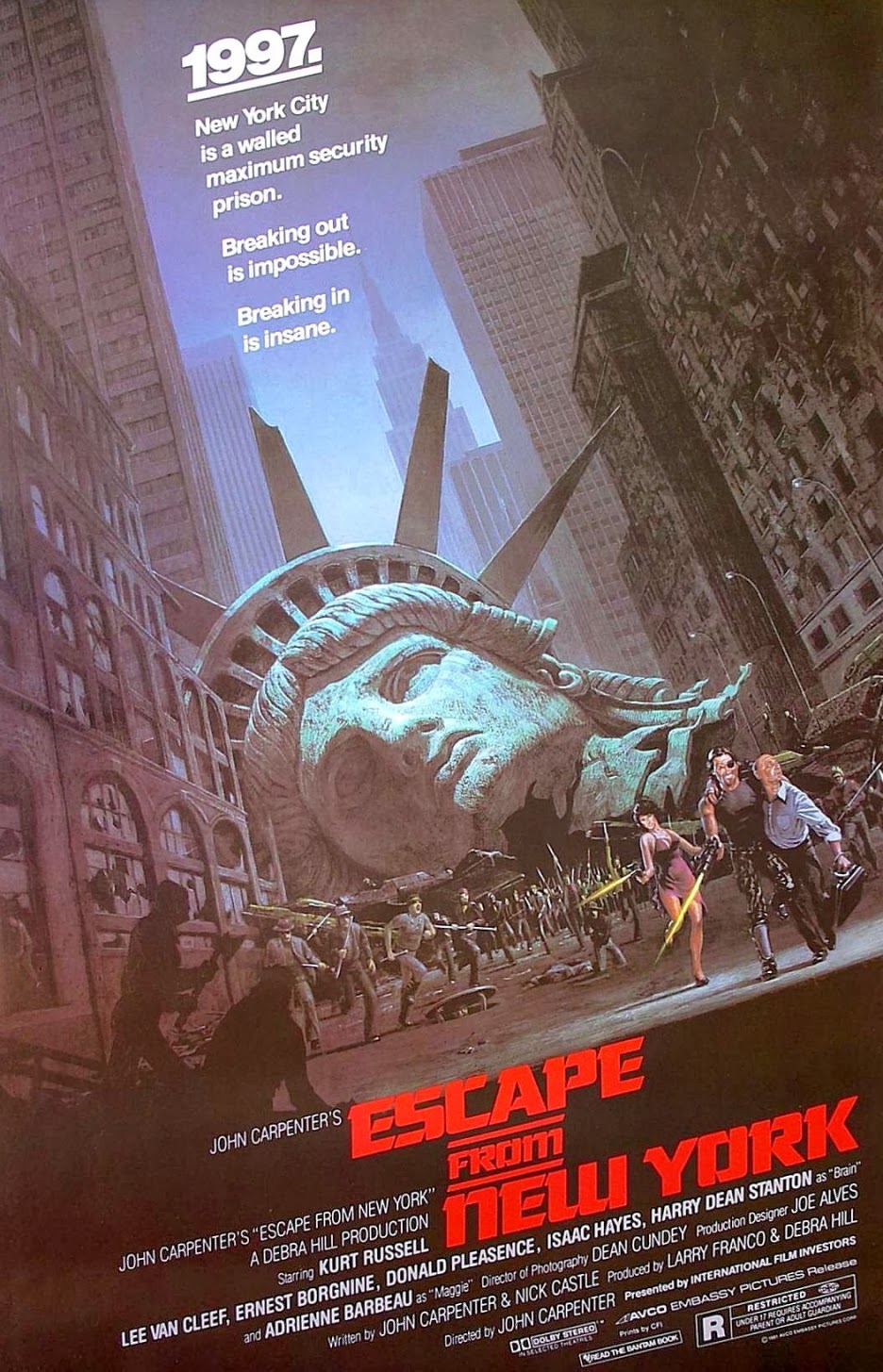 Oh no, the president is trapped on an island that has become a prison! Kurt Russell not only introduced Super Bowl teams and drives a sick ride in “Death Proof”, he is none other than “SNAKE”. He is the only man that can go into Manhattan, which is now a prison island, and rescue the president. Not since “Bad Dudes” have we seen such a badass premise. The movie holds up well, and the future world here is a cesspool that becomes awful, thanks to World War 3. No, not the WCW ppv where 60, yes 60, professional wrestlers are involved in a single battle royal. It’s 3 rings, it’s 60 superstars, and the winner gets a shot at the title or it gets the title themselves. There was even a point where a bit of controversy happened. You know, when Macho Man won the title and it was supposed to be Hogan. A visibly upset Hogan protested but it was Macho that one. Anyways, “Escape From New York” is an incredible cult classic that showcases Kurt Russell’s ass kicking persona, after he wore tennis shoes and was a computer. Oh man, where’s Little Dee Dee Ramone? He’d find this funny. Too bad you can’t bury the hatchet with someone that has gone missing. I’ll digress. They made a sequel, but this remains an insane piece of cinema, and one that you’ll have to see. The movie was set in the far off year of 1997! Oh no! Those damn dirty Apes….what? Wrong movie? Right. 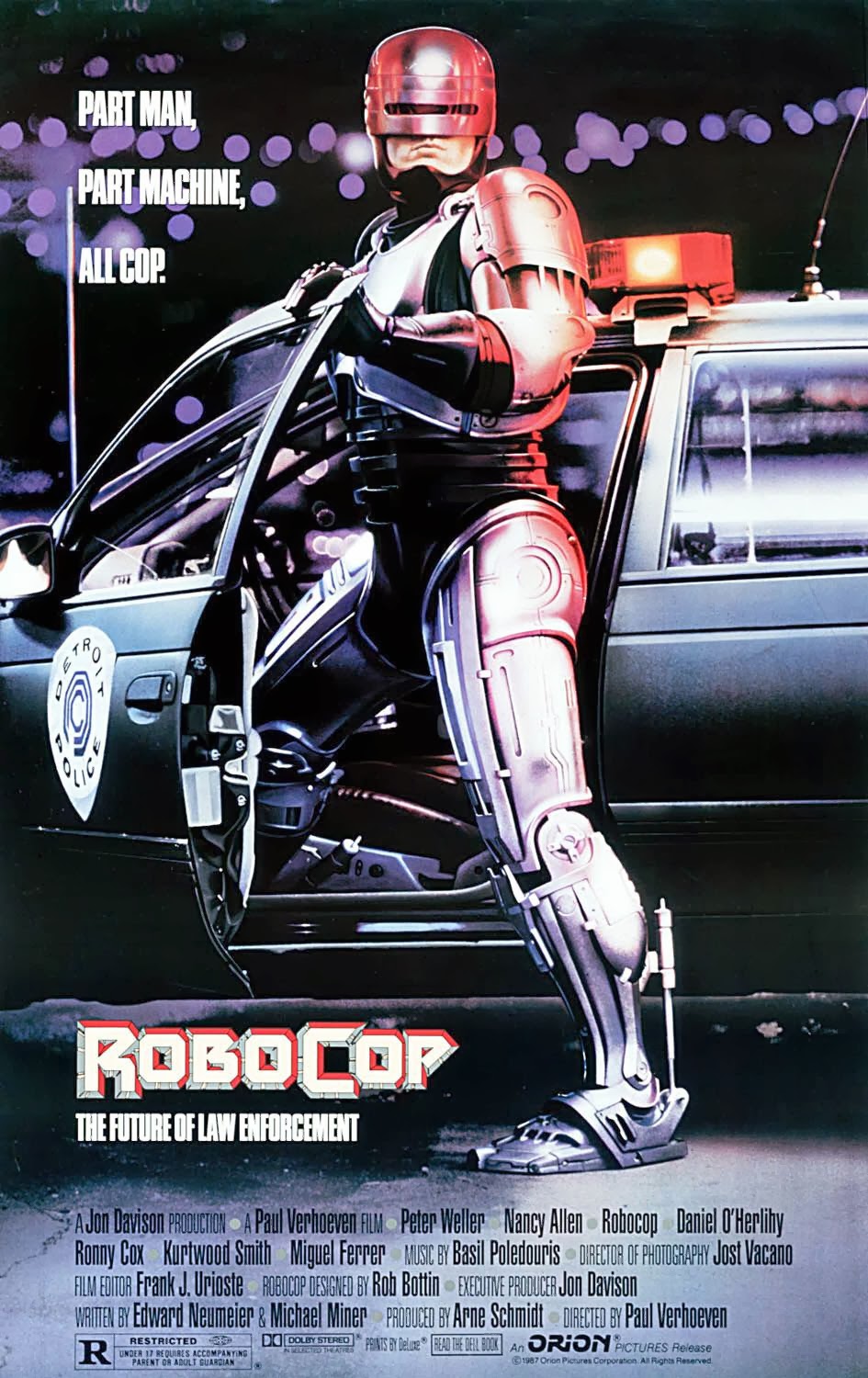 Detroit is a mess. More so than it is now, in the future the police force becomes a private affair. A libertarian’s dream, the police becomes privatized, and we get a super cop. No it’s not Jackie Chan as inspector Lee, it’s a man they call “Murphy”. No, not “Beverly Hills Cop”, but “Robocop”. In the future, ultra violence and overkill becomes a standard. You’ll recognize Red Foreman as one of the villains, long before he was threatening to shove a foot in his teenage son’s ass, he was tearing up the mean streets of New York. According to the internet, the ultimate source for misinformation, Robocop is set in 2043 or 2044, and the way things are going, it very well may be right. Before you go and see the new movie, get a group of friends (or in my case, no friends, just 3 cats) and watch the trilogy again. Released in 1987, this ultra-violent movie was probably one of the coolest movies my parents let me see when I was a kid. I was 4 years old when this one hit theaters and my dad let me check this one out in the grindhouse theaters of East Los Angeles. Classic double features, I don’t remember what this one was paired in. 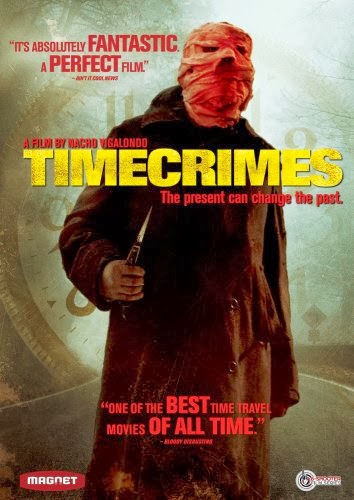 I’ve never been to Spain. Perhaps it’s because I’m Mexican, but Spain doesn’t always get the romantic symbolism that the rest of the world gives it. That has nothing to do with this entry, but I thought I would try to say something about it, because I want to create more word count, or “fluff” as some article marketers blame me for. You try writing 500 words on trampolines, and then tell me you can’t put fluff in it. Yeah, it’s not easy. Especially when the client gives you a picture, and you’re supposed to create 1,000 words from it. Anyways, Time Crimes is a Spanish film that is incredible. It is the first movie that I found to be a mix of horror and science fiction within a very good time lapse. This movie follows a man that is being chased by a man in a mask. However, as the story unfolds, more and more time paradoxes are created and the story starts to unravel so many points of view that you’ll be asking question after question. Some may find Hector to be a stupid main character, others will see this as a smart, killer science fiction movie. Only after writing a great deal of this, did I realize that this is not a future shock movie at all. Actually, it kind of makes me wish for the future, because it’s not half bad. 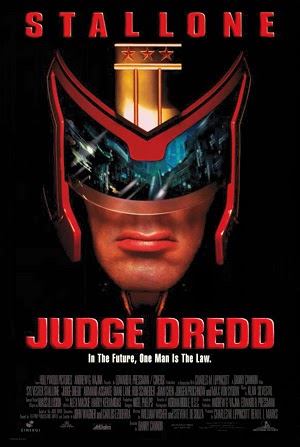 Quite possibly the worst movie on this list, which immediately makes it the BEST movie on this list, right? Stallone’s iconic poster is incredible, at least for me. The movie is set in the third millennium, and the Earth is horrible. Left to waste away and die, essentially, the justice system is no longer what you may think. The police is now judges (very much like the Bible), and street justice happens all to many times. When a serial murder escapes, the Law has to chase down the culprit, but not without introducing Judge Dredd aka Stallone. This movie may be awful to most, but it went on to make 113 million dollars, proving yet again the critics are stupid and don’t showcase any sort of intelligence. This is a legitimate action film, but features dystopian qualities, and has nothing to do with horror. Ok, maybe a small thing to do with it, or perhaps I’m just reaching here. Yeah, I’m reaching, but that’s because I can’t remember every single film that has a dystopian view point, maybe “Book of Eli” should’ve been in here. 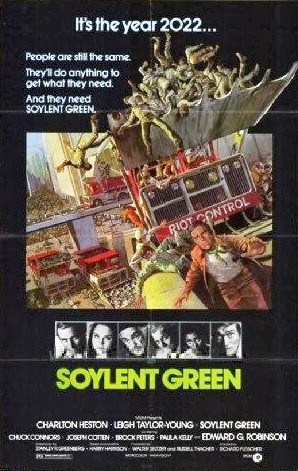 The 1973 film “Soylent Green” features a future in 2022. It is an awful place, where poverty, global warming, overpopulation, and oh crap it’s already happening! This movie features an interesting premise, where the food supply is pushed onto the world with a whole new sense of appeal. Soylent Green is a food ration that is supposed to save the planet, only it’s being made of a very strange substance….or perhaps not so strange! Should I ruin it? No, just go and watch the movie and see why Charlton Heston makes a compelling character. This is a cool film, that features a future that is completely scary. It’s a slow moving, somewhat boring movie, but it is still an iconic tale of a future that may not be so far off. The future definitely sucks in “Soylent Green”.

You can always come up with other movies, like Alien, Book of Eli, Generation Doom, Tank Girl, and so many other movies that could easily fit in this category. I didn’t want to focus just on dystopia. However, movies that are set in the future and fit the category of horror is tough. I guess I could’ve talked about The Omega Man, but eh, by the time I got to this I stopped caring about the title and even the grammar, citations, and more. I guess that’s what happens when you are a sole writer, editor, and sometimes reader of this site. Want to help? Buy a dvd or two from the links provided.

Looking for grindhouse, horror, or sci-fi films? Please check out our amazon astore featuring all things horror. Don't trust astore? Check out amazon.com, surprisingly they have more grindhouse,horror,and rare sci-fi than you may not have thought possible. Seriously, help out by buying something.
Posted by Jay dune No comments:

I declined an offer to turn this whole site into an eBook and shut down.

When I was a teenager, I wrote for a magazine. It was a paper zine, and I didn't get paid. I created a body of work that would become Scary Film Review years later. I did it for free. I had a passion for writing to the point that I'd do it for free.

I still do it for free.

So with that in mind, I'm going to be writing a storm and posting after I finish. That means the updates will be slow, and then it will start to hit daily for months on end. When you have a passion for something, it's hard to expect others to have that same passion.

My attempts at hiring writers for this site and others has failed. I'm completely appalled by some of the responses that feel that life owes them something. If this is the generation that is set to lead us later, we are all doomed.

So until My next update, read the archives, there's 800 posts. You're bound to like one.

I just want to say one last thing before I add more stuff to the site.

If you do something for free long enough, someone will eventually pay you. I wrote for free, 10 years straight, and now get paid to do so. If the money dried up, and no one paid me. I'd still write. I don't believe anyone owes me anything. I'll write for free, pay, or a ham sandwich.

I'm sorry if I come across negatively, but I'm tired of seeing responses from people that do not write without pay. To quote Garth, "It's like people only do these things because they can get paid. And that's just really sad."
Posted by Jay dune No comments: