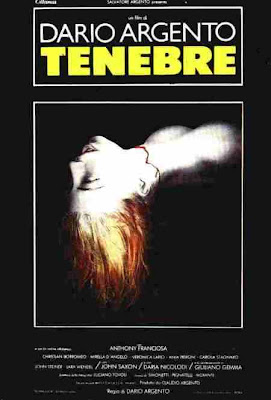 In 1982 I wasn't even a thought in my parents mind. I didn't arrive until a year later, and things got better for your old pal sir jorge. Dario Argent really pushes the boundaries of art and film, and it shows that art sometimes supercedes horror, especially in the setting up of his final solution. I watched this film in high definition with full surround sound, so I really took in the experience, more than usual. This film is an odd one, and one that admittedly, took me a long time to finally sit down and watch. So let's all take a moment and look back in time once again for this 1982 classic, Tenebre aka Tenebrae from directly and horror mastermind Dario Argento.

The story is a simple one up front. A killer is on the loose, and he's killing people with connections to a writer who is on tour in Rome. The book in the film is called "Tenebre" and we see it in the film many times. The movie moves away from simple horror methods, to murder mstery as the film obviously wants to sway you into picking the killer's identity. As the movie progresses our main character "Peter Neal" becomes more and more obsessed with finding and stopping the killer, but there's more to the story than just a rampaging serial killer.

Here is a trailer for the film Tenebre directed by Dario Argento:

The film itself isn't the greatest of quality. However, the attention to details and colors are apparent yet again. You can always tell a Dario Argento film by the use of emotion and colors throughout. You can see the grain of the film never really shows its age, and the shots each are systematically put out to prove yet again that you can mix horror and art in such a unique way. The film progresses through night, dark, rain and clarity, while never sacrificing the viewers pretenses.

There are sexual references in this film that I thought were amazing. Domination, S&M, humiliation, bukkake, oral sex, and so much more are touted in an intense flashback.The flashback shows limited nudity, but there is so much more that is told through the simple segment, that you can't help but think about what message is being sent through this obviously provocative tale. The use of censorship here provokes the imagination to an all new sexual clarity that can only be done by NOT engaging into the full scenario that it implies. One noted psychologies studied the film and concluded that the deviancies between men and women are the central issues. He noted that the killer kills perverts, or supposed perverts. However, those things are only seen if you really study the film, or ask questions throughout. I ask a lot of questions and take mental notes to what the visuals are trying to portray. So I noticed the sex as a backdrop, but only if you're wide awake and know how to diagnose such things. If not, you'll not notice because the movie doesn't hit you in the face with sex like other films.

The movie goes through a nice body count without getting too gorey. This film actually has limited gore, considering the death sequences. Much like "Suspiria" didn't show you the full slayings, but rather a first person view of stabbings and control, this film takes similar steps to prevent over saturation of gore early on.

Much like many other Argento films, the ending brings everything together and all bets are off on the gore and blood. We see a huge eclipse of sorts from the rest of the film, and we see a smart and witty way to deal with the main character, the revelation of the killer, the identity, and how to really push this away from thriller/mystery territory to a horror film with brains.

Is Tenebre Scary? : No. The film isn't really scary. In fact most people will be bored with the pacing. The pacing of this film is terrible at times. I know that Argento is setting up a sub-genre sometimes referred to "giallo" and really trying to promote mystery over horror and gore, but it really takes a lot out of you in regards to timing and perception. That being said, this movie isn't terrible, it's just hard to watch at times.

The situations call for a great deal of dialogue and effect. However, this gets in the way of the serial murders as we can never really get to know certain characters or motivations until they are way too late. There is a great deal of attention put into swerving the audience into believing that the killer is a mysterious woman. But not just her, there are moments when you second guess everyone, including Neal! When the final bell starts to ring, you swear you have the answers, but it doesn't happen, it just doesn't happen and the rug is pulled from under you and you realize how genius the writers are.

Tenebre is not recommended viewing for everyone. Diehard Argento fans will argue that this is a better film than most other horror/mystery films in the genre. However, The great thing about this film really relies on your attention span. If you have a long attention span and can deal with the blood flow at the end, you're in good hands, as Argento masterfully guides you through a murder mystery with trace elements of Horror and gore to fill your cup. I for one enjoyed the sounds, and colors, and liked it for what it was. You decide though, and watch it if you are an Argento fan or just curious. 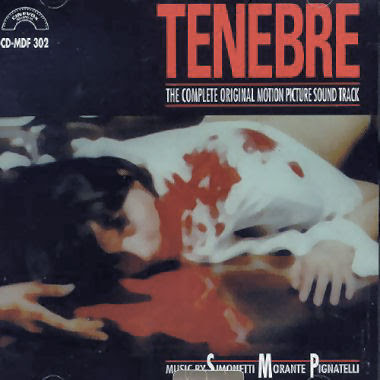 The film really had me interested with the sounds and transitions, specifically the soundtrack.

And it shows! The synth-rock style of music in this film is amazing. There are points that transition the story from one moment to the next with some great music. I really loved the soundtrack and look forward to picking up on Vinyl later on this year. You can find the cd if you look hard enough, but it's really a great thing to have good sound to match your movie. Argento really outdid himself with Tenebre's soundtrack, it's really the best part of the film when you're bored with some of the story line.