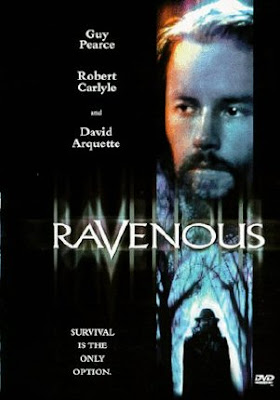 The cannibal genre isn't something that a lot of people want to see. Most people will immediately shrug off cannibal movies as too gorey for any good. However, in 199 a horror film was released that detailed a cannibal in 1840. The story has a little resemblance to the Donner Party but it took things seriously and presented one hell of a scary movie, without glorifying the gore aspect. The acting was well done, the story was written nicely, but the marketing killed this film and if I didn't drag my stepfather to this movie I might have missed it. The movie I'm talking about is Ravenous, a real cannibal movie that you probably haven't seen yet.

Ravenous is an interesting bit of film because it deals with a subject matter that no one really discusses in a serious tone. The movie is one of my personal favorites and stars Guy Pearce, Robert Carlyle, Jeremy Davies, Jeffrey Jones, and David Arquette. They put on a show, and this film seems like a good thing to put in front of a live audience in play format.

Here is a trailer for the 1999 film Ravenous:

The movie starts in the Mexican American War, we follow a US Army officer in the midst of battle. As he sees his unit getting killed he pulls himself under a slew of dead bodies and pretends he is dead. After the dust settles he infiltrates the enemy hq and captures them! He is promoted for his bravery and then we get to some strange brew. Our hero sits amidst a platoon and they all are eating huge steaks, with blood flowing and he starts to squirm. This somehow tips off the commander of the unit and transfers Boyd (our hero) to a remote fort in the Sierra Nevada mountain range. Here is where things start to slowly boil over.

The film is filmed in such a beautiful way. You feel the cold and you feel the winds, you are really placed in the middle of the setting. The actors all have their own attitudes and really bring their roles to life. Things seem to be going well for Boyd until a strange little man shows up. This man tells the camp about how his party was taken refuge and that there might be more. Calhoun also mentions that they had to turn to cannibalism at one point.

The cool part for me was that there was a Native American in this film that did a great piece of foreshadowing. He tells the group about the Wendigo myth, and this plays a huge part in the film later on.

As the film progresses we see that Colqhoun is a cannibal and he's uncontrollable. He slowly starts eating the party, but the camera's do not glorify the gore, they make it seem real. Colqhoun then sets his eyes on Boyd, Boyd runs for his life and in an awesome turn of events jumps off a cliff! That's right, he jumpes off a cliff!

Colqhoun and Boyd play a cat and mouse game for the rest of the film. The camp turns into cannibals and then each of them are killed and eaten through out the film. The climax of this film is obvious, with the two fighting each other in a barn, however, the ending really punches you in the mouth and gives you a major intellectual situation. I won't reveal it, but man does it haunt you. The ending and the sounds, the noises the quiet, the last lines of the film as the camera moves away and shows you the whole picture is frightening beyond so many other things you could imagine going on.

With an awesome piece of film and story, an officer arrives to smell stew...he eats...the film closes.

Is Ravenous scary? Yes. This film is psychologically and physically scary. The director really makes a very sick idea of Cannibalism and turned it into a dark and serious situation. The movie doesn't play up the comedic values of earlier cannibal films, nor does it glorify the gore that so many other films play out. This film uses very smart and clever acting to portray cannibalism in a serious manner.

That being said, I understand that there are comedic moments, and I see how this film could've been pawned off by critics. However, upon second viewings I see the seriousness of the story. The final moments of this film is just amazing. It is scary to think of the lines that are uttered by Colqhoun. His lines haunt you for as long as you think about this film. This film should've gotten more credit, but unfortunately, it just fell through the cracks.

Ravenous can be slow to some. It is a slow burner, it has a lot of moments that could bore some horror movie fans. It relies heavily on acting and camera motions, and it does seem longer than it should be. However, as a fan of slow builds and literature, I can see why the movie plays slowly to a final fight and then prolongs the magic with such a subtle stroke of horror. Ravenous is psychologically startling more than it is gorey. I like it, I think it does the same thing that The Jacket does in a lot of ways, and really like this movie.

However, I must warn you, it can get slow. This is a period piece and is a cannibal movie at heart. If you're open minded you're going to see the depths of the film's satire and obvious points. Check it out if you can, as it is one of my personal favorite cannibal movies. I really hate the marketing of this film, it is NOT too funny if you think about it, but I see the humor.