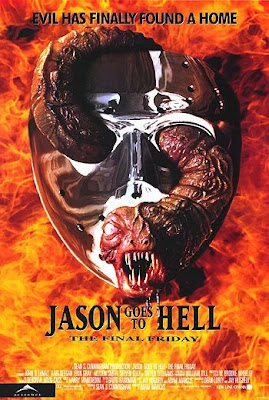 Jason Goes to Hell was one of my guilty pleasures for a long time. I was twelve years old and hitting puberty when I saw this film, and the nudity taught me a whole lot more than health class ever did. This film is the ninth edition of Friday the 13th and it wasn't half bad, and I still like it.

The story revolves around the capture and killing of Jason Voorhees. The beginning of this film includes some great gratuitous nudity, and then a swat team blows up Jason into a million pieces! This is epic! NO CG, just pure effects, and it is awesome. At the autopsy the coroner seems to be getting sick while trying to investigate the pieces, and then we get an interesting piece of the overall Jason puzzle...our coroner takes a big bite of the still beating Jason heart! This has some great gore, and some blackened blood spewing everywhere, insane!

Here is a trailer for Jason Goes To Hell:

The film has a nice sub plot, that goes something like this; Jason is back and he can only inhabit the body of a voorhees or be killed by one. So he seeks his only living relatives to get reborn and visits Crystal Lake and the surrounding city, where some of the Voorhees family still lives. We then get some major fight sequences, some sickening gore effects, and even a little ramen thrown in for good measure. Overall, this is a faster and dare I say, scarier Jason than the one we saw in previous films.

One of my favorite horror movie kills occurs in this movie. Three campers go out swimming and return to their camp site, and immediately we see boobs! WOOO! I'm all for gratuitous nudity! Then begins the sex scene, and man, this is graphic and still holds up in the all time best horror movie sex scenes. That is, until it gets interrupted with Jason slicing a woman in half and we see her insides! That's right, the body is split in half and spewing blood, which is so rad! Once again, NO CG no tricks just pure blood and latex effects, I applaud this, as it definitely adds to the gore in this film.

The pacing is great in this film. The director, Adam Marcus and the three writers did such a great job moving the camera and film along. There are some dark and shaky spots in the film where you couldn't tell what was going on, and the scare tactics weren't all that great. I am referring to the jump sequences that are in nearly all horror films.

I liked how the majority of the characters did not back down from any of the incarnations of Jason. They fight back until they are killed. I like to think that if we were in the film we'd do a little throwdown. I mean, it's not like we're in Wes Craven's Shocker, but if I were, I'd at least go for a shot to the face! Maybe a piledriver, an elbow to the face, a forearm...to the face! Come on! You would want a piece of Jason too, it would be epic! 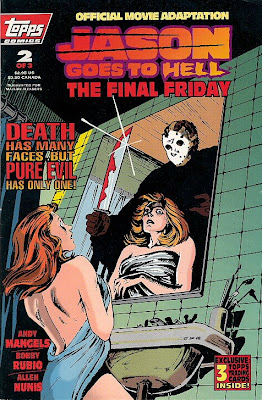 Why Jason Goes To Hell Is Scary: The scariest moments in this film are not so much the outlandish plot of reincarnation that throws a spin into the Friday the 13th universe. The scariest part is somewhat supernatural, and if you'll stand by and listen, you might agree with me.

Demon possession is what I think the film projects as scary. Jason starts abducting bodies and then sucking them dry, at the same time using these vessels as weapons in his fight against anyone in his way. I am a Christian, and grew up with a Catholic mom. I'm not a catholic anymore, but I recall a time when my mom gave me this book to read. This book described Mexican Demon possession. Meaning that in Mexico there were missionaries that were casting out demons, and you know what? That kind of scares me. Later on in my life my mom and I became protestants, and I am still a Christian. However, my mom still held on to the idea that demonic possession occurs often and frequently. She even went to a church in Inglewood, California where the congregation specialized in casting demons out of people and she told me about a time when she went and there was one of these services going on and a manifestation occurred and the "demon" was choking people and going nuts. The first thing I thought of was, Jason Goes To Hell. I'm on the fence in regards to demon possession, but this movie could scare the hell out of people. Especially those that are of religious backgrounds, assuming you believe in possession and/or repression.

If you're not into the whole religious angle that I'm approaching this argument with. Consider that small towns only have one law enforcement agency working for them. That is scary in this film, because there is no big police force, there is only a sheriff and a few deputies. So when you try to call 911, you only get a couple of people responding, creating a scary moment in your crisis. Now, while the people are getting terrorized by Jason, imagine the law enforcement problems that are created due to the police being busy! These small towns suck at law enforcement and are not prepared for a serial killer or an unstoppable force of demonic nature!

I know, these two scary moments are a bit crazy. However, I try to think about how scary these things are in relative terms. These two things scare me. I recall a time when I was a child when I called 911 and the police took nearly an hour to show up. So I can only imagine what would happen if a serial killer was on the loose and there was no response and rightfully so! These small towns just don't have the man power.

If you're just shaking your head at my mockery of 911. Consider another movie with a crappy response to police response. One of my favorite films, Cop Land! Stallone pulls out a legitimate acting performance in this film about a small town where there is only one officer in charge...a Sheriff...played by Stallone! Great stuff! Similar themes run in Cop Land and Jason Goes To Hell, only one is serious and the other isn't.

I am not going to get out of this review without talking about the ending. The ending goes insane. In order to kill Jason, a special dagger has to pierce his heart, and the slow motion day dream camera motion really is stupid. However, even dumber is the sequence where Freddy's glove comes out of the earth and grabs the mask and laughs! This prompted film makers to get forced to make Freddy vs. Jason (which I enjoyed) years later.

Jason Goes to Hell came out in 1993, and still holds up as a fast moving horror film. I was surprised how good it flows, which I really thought was stellar. It's a 15 year old film and yet I wasn't bored at any moment. I thought that the comedy was toned down enough to make this film worthwhile. I enjoy it after all these years, and the whole demonic possession angle still scares me a little. Jason Goes To Hell is worthwhile, I recommend it. It's way better than Jason X, that's for sure. 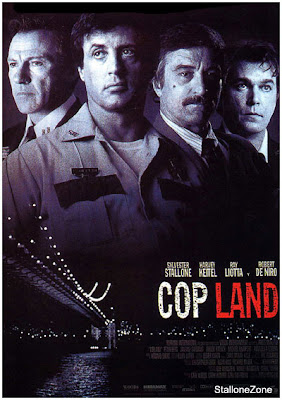