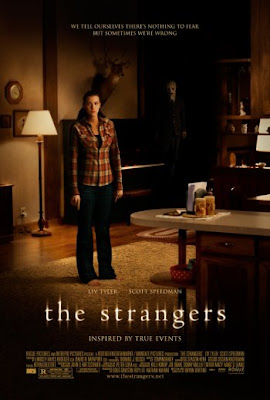 Once again, we step into the 21st century of film. This movie should have been a grindhouse cinema classic, as it offers nothing more than a thin plot, and terror. The Strangers provides a good amount of jump scares, creepy scenes, but overall doesn't do much in the way of setting up another pg-13 type of movie. I was hoping for more out of this film, considering it went on to make quite a bit of money with a low budget. So here we go, on a lovely Monday morning, we are going to be looking at the 2008 film The Strangers.

This movie has a simple synopsis. Two people are terrorized by masked culprits, and that's about it. Not too unlike the idea that brought us "Funny Games" last year. However, where that movie really tried to be a social commentary in the midst of a horror film, this one just tries to scare you right away and never lets you go. However, you're tired by the end of it, and it really doesn't provide for much else but creep factor.

Here is a trailer for the 2008 film The Strangers:

The movie opens up innocently enough, and the film makers try to make you feel for the characters. However, the first thing you see on screen is a disclaimer of sorts, telling you that this is based on true events. As you may know, that is just a horror movie cliche at this point to drum up interest in what otherwise is a horror movie. If you want to break it down further, you are essentially watching a movie to entertain you on the basis of someone's tragedy. But that's not for here and now, so we'll digress for a moment. The characters are seen at a wedding reception and you feel the emotional connection just out of pity as one of the characters eats out of a tub of ice cream.

The movie progresses slowly with a lot of stillness, quiet, and nothing in the way of score. The movie has to set this up for you to get into the horror, as the couple is in the middle of nowhere, yet has the amenities of the 21st century. The movie moves along and you really start to wonder about this film, because you have to invest a good amount of time of nothing, and then it starts. There is the creepiest of figures in the background and he silently stalks his victim, not moving forward too much, and just enough to scare you on screen.

The sounds make this movie good. The foley is dead on. You hear subtle footprints, heart beats, and breathing. You hear wood creaks and even when it is still there is something going on that just sends a chill down your spine. All the cliche things that make for a good payoff are found in this film's set up, creating a nice atmosphere. However, the payoff doesn't really push you over, and you end up wanting more of a story, which is odd, considering this film seems like a spot on slasher film at times.

Liv Tyler is not too bad in this film. She does a lot of crying and actually fights back in a few spots, and I liked her in this role at times. The other parts of the cast offers a little more to this film, but nothing is going to win awards as the Academy doesn't feel that acting scared is too hard.

Is The Strangers Scary? Yes. The movie offers up a lot of scary moments, besides the typical jump scenes. The scariest of scenes really does upgrade this film from a passing thought to a rental in one particular shot. (no pun intended) The couple are locked in a closet with a shotgun and they are scared. They hear someone approaching and as soon as the character appears BOOOM! Shot to the head with a shotgun, in all the gorey glory you could imagine from this type of film. This of course works perfectly because they kill the wrong person! It was their friend, promoting the tone and feeling of the film to hysterics, and scaring you with the real scenario of accidental shootings in the home. This is the best part of this film, because we hear about accidental shootings all the time.

The scariest of parts is that the killers are so much smarter than the people. This is true in large part because serial killers often times are so smart in what they do. Obviously, in the heat of the moment, people just put their gaurd down and are easy to scare. This film plays on that fear well, and it pushes the boundaries until the end. There is a lot of stereotypical things to this film that doesn't do favors to the discerning audience (like me), but it works briefly. The goriest part of the film is the head wound, but that's not saying a whole lot. There is a portion of this film that involves slashing and stabbing but the film makers swing the cameras away from the action and you are left with sounds and screams. There are also a lot of logical problems with this film and if you ask questions, you are going to be saddened by the way they are answered.

The reason why this film should've been a grindhouse classic is because it doesn't offer a lot in the way of story. The purpose of this film is just to scare you via gore. The head shot, coupled with the plight of the couple and their captors is something that made 80's slashers great. The moment that this transcends mere stupidity is that the killers meet up with a couple of Mormon boys and talk to them, and they do not attack or do anything. They simply go along their way. This piece of footage made the film so much more than just a throwaway horror film. However, most might argue that The Strangers is a tight thriller with horror elements and is worth watching more than once, and they'd be wrong. This film misses the mark in the way of emotional connection, and really tries to jump the shark as the main character runs out of the house unprotected. Lame. The Strangers offers a nice bit of sound design and some good scares, but as a whole it's not going to win any horror awards any time soon.