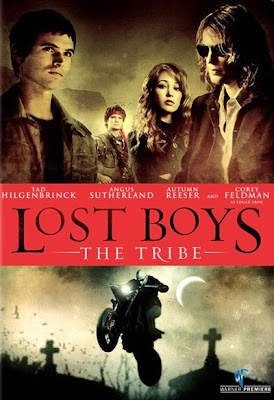 I’ve been doing movie reviews for a long time, and the most requested movie of all time for me to review has been The Lost Boys: The Tribe. That’s probably because I don’t have a whole lot of visitors, but that’s all right. The Lost Boys is a franchise that has a lot of fans, and purists. With so many different horror remakes coming through the wire, you might be afraid of watching a sequel to the original Lost Boys film, but give it a once over and you might enjoy it, but you really have to love straight to dvd movies.

This movie’s opening has a great cameo from the legend of make up effects from Tom Savini getting dismantled by some vampires. I thought this film was going to be about cannibal vampires, but it wasn’t. This movie is about a brother & sister duo that moves towards the ocean and befriends a circle of vampires. This plot structure was not played off well and made me kind of sad that I had invested so much time into the set up of this horrible movie. I tried to watch this film with an open mind, but within the first half of the film the clothes start coming off and we get treated to a ton of nudity for no apparent reason. We also see some relaxed vampire effects and cg effects that really look lazy.

I tried to dumb myself down to this movie’s level, and then I realized that the star was in an American Pie sequel, and here is the star in all his comedic glory. 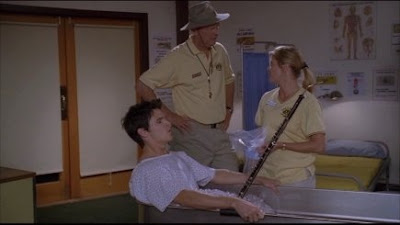 Yeah, there he is, Stifler’s little brother with an oboe on his member. Like I’ve said before, I’ll watch ANYTHING and well, sometimes these straight to dvd sequels are launching pads for references in a horror review that really makes no apparent sense.

Here’s a trailer for Lost Boys: The Tribe:


The movie got a lot of attention, and I believe that some bloggers were paid off to promote this stuff, all because of Corey Feldman’s return to the screen. He does a great job reprising his role, and I swear he hasn’t aged a whole lot since he was a kid. He plays the vampire hunter and he makes some references to the original Lost Boys film, but for the most part he’s the highlight of the movie, which isn’t saying a whole lot. 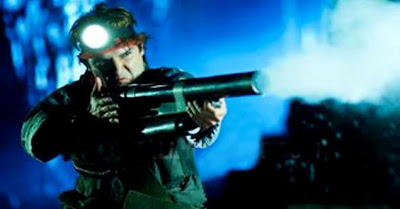 The movie had a terribly linear script, the story was more about sex than it was about vampirism in the traditional sense, and while I did appreciate all the gore effects, I don’t believe that this movie stands up to the original in either style or substance. This film looks like it was filmed with an HD camera rather than real film, and while I do admit there are a few cityscapes, but for the most part it just didn’t have the film quality of most horror films straight to dvd or not.

The Lost Boys 2 dvd is enjoyable for a short time, however once the nostalgia wears off, you don’t have a good vampire film at all. In fact, I had more problems with this film than I have had with a lot of other movies out there in the same category. There is a great surprise at the end, but quite honestly, I hope that doesn’t make for another film with the Lost Boys franchise. This movie had cheesy effects, horrible dialogue, and too much nudity for no apparent reason. If you’re absolutely in love with Corey Feldman or just want to cheer on another Lost Boys movie, then this is for you. I didn’t like it too much, but I managed to get through it.