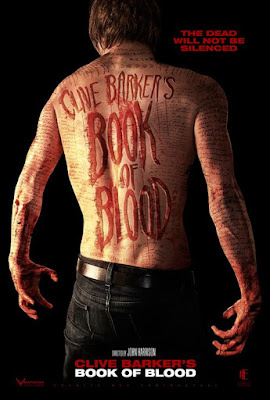 Clive Barker gets no major respect from the mainstream, yet he consistently puts out some insane story arcs and moments in the horror genre. While he hasn’t scored a huge mainstream success since the 1980’s, Clive Barker continues to forge ahead with some sick and twisted moments. If you’re not familiar with Clive Barker, than you’re probably not going to care that he is the mastermind behind this movie. Book of Blood was scheduled for a major movie release, much like Midnight Meat Train was, but somehow along the lines it was derailed and it never got the release it should’ve gotten. But now it’s on dvd, and it’s going to gain Clive Barker some major notice, if only more people would pick up this film.

This is the seventh story from Barker to get a full movie release. Since 1986 he has had a steady string of b-movies come out as adaptations most of them getting only a whimper of attention, and cult status as the years progressed. Clive Barker’s Book of Blood is an adaptation of a smaller story that is found in his collection of “Books of Blood” and stays relatively in tact and faithful in its adaptation and prowess.

The film is simple. The plot being about a young man who finds himself investigating a haunting of sorts, only to find out that his skepticism is his biggest downfall as ghosts manifest themselves into reality, causing quite the violent sequences; which are done with attention to gore.

The gore in this film pops up in some sick moments. I found myself surprised that the CG work done on these death sequences wasn’t terrible. If you recall “The Midnight Meat Train” you’ll remember that there was a lot of CG blood added in after the fact, creating a mess of what would normally be a good sequence of bludgeoning action. Within ten minuets of watching this film you see a face peel, and that has to be the first of many things to come, unless you miss it. It happens fast, but you see how it all turns out, and you don’t want to see it continue, that’s for sure.

The manifestations of the spirits creates quite the effects when writing begins to be carved into the skin of our victims. It’s really a surprising effect, done quite generously well, all things considered. The attention to minor details is somewhat surprising, with lighting, sound, and other small pieces put into their exact locations, creating quite the ambient surrounding to what otherwise should be a mindless horror film.

Is Clive Barker’s Book of Blood scary? No.

This film doesn’t scare me and probably won’t scare many people. For some reason the appearances of “ghosts” and things along those lines aren’t that scary any more. The build up to the invisible in this film is really only made evident with the skepticism possessed by a metaphysics professor. Showcasing an unnatural and uneven balance between what is real and what is fake within the context of this film is too much for one viewer to try and understand.

That being said, this movie has a deep underlying issue that is much more cerebral than other films in the horror genre. While I like thinking about film, and understand the complexities of trying to adapt literature to film, I don’t think that this adaptation does Barker justice. There’s just too many nuances that can’t be expressed with visual and music.

There is a mix bag of different things that can create a good scary feeling, if you’re not an avid fan of horror. These set ups, loud noises, and gore effects are somewhat after the fact, because by the time you piece together the social settings in contrast to the slayings, you’ll most likely be tired. I know I was tired of this film, even though I kept giving the thing chances. It’s not just a slow paced film, it’s just got so many layers that don’t need to be there for such a story. It’s almost as though the production was stretched to fit a full length film, instead of a made for television 1 hour romp by “The Masters of Horror”, which seems better suited for this story.

Clive Barker’s Book of Blood is an interesting horror film, on a visual level. But story and execution it’s just not that great. I don’t recommend this one for everyone, but I think that many people will find this film either boring or simply trying too hard to gain a foot hold into the genre. Barker has done better writing than getting his film work into the hands of horror fans, and I guess I see why this didn’t get a wider release in theaters. It’s just not fitting, it has its moments but nothing that you’re going to have your jaw drop over or anything that is going to stick with you for a long time.