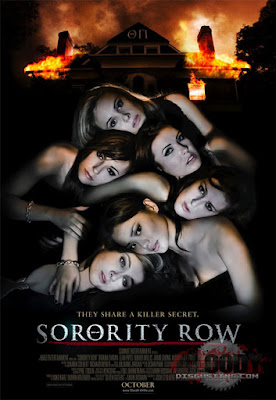 This movie felt so contrived, and I wasn't sure what to expect. Sorority Row is a new-school slasher film that came and went to little fan fare. The movie revolves around a group of Sorority Girls that are trying to pull a prank. They end up killing a co-ed and swear not to tell anyone.

Months later, they end up being stalked by a killer who is killing the witnesses off one by one!

Visually this film isn't too crazy, it's definitely not "made for dvd" or anything like that, as it has some professional qualities to it. The film really goes through some interesting motions, but takes a bit to set up the second part of the plot.

The gore is quite alright for me. There are some interesting kills, although some don't make sense. As the girls keep getting killed one by one, things get really weird until I called the predictable twist ending.

Nudity is what I expected a lot of in this film, but it wasn't quite good at all. There were a few scenes, but nothing you'd expect from a film called "Sorority Row". I actually fought off falling asleep at one point.

This movie wasn't scary at all. In fact, most of the movie is boring. There are some nice gore spots to break up the doldrums, but overall, it's just a boring ride for me.

I found that the twist ending was stupid, and made little to no sense.

Have you seen the movie, "I Know What You Did Last Summer"? If so, you've already seen this movie, just a few interchangeable characters, lesser known actors and more gore at times.

I wouldn't recommend Sorority Row, but if you have nothing better to watch, check it out, I guess.