I'm now moved into my new home, I'm jacking someone elses wi-fi and I'm trying to make the best of it. The movie reviews are slower coming since I'm unpacking and getting settled, but don't worry I'll have things back into horror glory soon enough. For now, enjoy a little Rewind of a franchise film that will have yet another sequel this month. Yep...Saw. 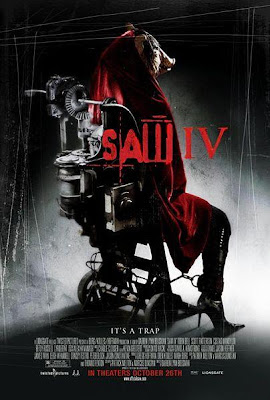 Saw IV creates another staple in the Saw franchise, but this time around, things are more ridiculous than ever. However, that doesn’t mean that this movie isn’t scary or relevant, it just means you have to dig a little deeper to get anything out of it, besides disgust.

The opening gore of this film is tremendous if you’re not used to horror movies. Even if you’re a casual fan, this opening could make you sick. We’re treated to a complete autopsy of the mastermind Jigsaw, and we get the first mysterious piece to an overall puzzle that will take us through this side story of sorts, painfully I might add. Inside of Jigsaw a wax tape is found, and once played things start to roll. We are then treated to a story that is not too unlike “Game of Death” or “Fist of Legend” in many ways, even though those two examples are NOT horror related, they are similar…you’ll see.

A detective is called out and he has to go through different scenarios, and instead of the victims being tested alone, their fates all hinge on this detective making the proper choice. He misses all opportunities, and then we get treated to the ultimate twist ending. Oh and of course they spit in your face with the timeline as well, and I won’t spoil that for you.

Here is a trailer for Saw IV:

The gore portions of this film are elevated to craziness. If you’re easily disgusted by blood, this film is NOT going to be for you. This is not comedic gore, it’s geared toward “reality” in a lot of ways, and I can only correlate the levels to “slaughterhouse” portions as we see flesh being ripped, autopsy (initially) scenes, and just painful traps. We see heads getting crushed, barbed wire pieces, glass, and all the things that the previous 3 films had but turned into more extreme levels. This movie plays on the gore level a lot, and the twists, although interesting for a few seconds, are really not the glory of Saw IV at all.

We are also treated to clever back story, and Tobin Bell does a good job in this film, even if he is dead. The puppet is still creepy, and the voice of Jigsaw is insane to me, and really gives me quite the chill. Lets have him do trailer voiceovers now, he could sell me on any film.

What boggles my mind is the fact that the budget for this thing isn’t very high, it’s merely 10 million dollars, and yet it makes hundreds of millions worldwide and even more on dvd. This film isn’t all that great, and I have to admit that when this was coming out I was excited and even saw it opening night. To be even more honest, I’m going to be seeing Saw V opening day too, well, maybe the Saturday of the release. I’m a sucker for these marketing ploys and sequels, because I just am. I don’t even know why anymore, I just am always roped into these…but then again, I didn’t get into “Quarantine” so maybe I’m learning.

Saw IV really poops on the audience in a lot of ways with the ending and introduction of a new jigsaw to takeover the work of the now dead villain. 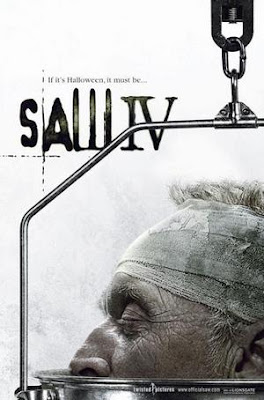 Why Saw IV is scary: You have to throwaway your consumer based review of this film. Do not think of Saw IV in terms of a movie, and you can really create a scary premise. A psychotic killer that is offering hope to his victims via elaborate traps is scary. What is more scary is that in this film, the people are not 100% responsible for their demise, as there is a detective that is the bigger victim, as he has to live with the consequences that are involved with the deaths of what he perceives as innocent. This of course can be stretched into a nice sermon illustration for those of you that are Christian or religious of sorts.

The scary part of this film is not so much the gore and the deaths, even if you too perceive the victims as innocent. The far scarier thing in this film is the depiction of clueless law enforcement. I don’t know about you, but I would like to have some kind of confidence in the Detectives in my city, and while I poke fun at the police a lot, I don’t want to think that the real world is like these detectives. However, reading a lot of true crime books, I’ve realized that a lot of police departments have failed to capture many serial killers in the past and some of which were NEVER captured. That boggles my mind, and every time I think about how serial killings like those found in Saw or Seven are just movie based stories, I realize that there are a lot of true crimes and unsolved mysteries in regards to murders. So that my friends is a very scary notion to me; if you remove trust in law enforcement then what do we have when we lose a loved one to ungodly acts like serial killing?

Saw IV is not the greatest piece of the Saw Franchise. In fact, it’s probably the weakest link, but closely behind Saw II if you ask me. I don’t like this one that much, but it still shows a scary enough notion when contemplated in terms of this site, but that doesn’t mean you should run to go buy it. However, if you are a fan of the series, now is the time to buy the dvd’s as they are all on sale and cheap…I mean dirt cheap. Saw IV is forgettable, but if you overthink it, like I do, it can be a scary film!