The Curse of the Werewolf Review 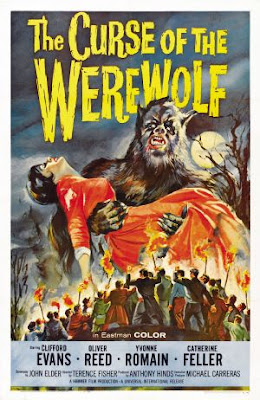 Here we go again, another film from the Hammer Production studio. This film from way back when, 1961, features a clever take on the Werewolf myths, based on a French Novel "The Werewolf of Paris" by Guy Endore. In the annals of werewolf movies, this thing is not memorable, and it really isn't too shocking in terms of gore, but it's a Hammer Horror film none the less, and it is worth noting and viewing, for this great movie blog...well it's an ok movie review blog...at best. So come with me as we go back to the 18th century Spanish world and read the styling of Curse of the Werewolf.

Right off the bat this film sets you up for character development. This movie is deeply moving in terms of acting and character development, with lavish sets setting a great back drop to a somewhat scary idea of werewolves in the age of pre-American traditional lore. For being a 1961 movie, the sets are well put together and the film looks like it had some serious money and artistic ability behind the production, and it really is a great testament to how much Hammer Film Studios paid attention to details.

Here is a trailer for the 1961 film The Curse of the Werewolf:

The stars of this film were Clifford Evans, Oliver Reed, Yvonne Romain, Catherine Feller, Anthony Dawson, and Michael Ripper, and they do a really good job in this. These people are not fly by night actors, they really try to do the best they could with the material given to them. It really does make you wonder what happened to horror films. Today, you don't really get good acting in standard horror films.

The story starts out with a beggar arriving into a Spanish village and ends up in the courts of royalty. There they treat him like a pet, until they eventually send him to the dungeons. He befriends a mute girl while he is there, and eventually she grows up to be beautiful. Then, the beggar strikes when you begin to think that this film is a love story, and we get to the good stuff, werewolf transformation!

Now, you usually get transformation sequences that range from stupid to good. Recall the transformation in the movie "Wolf" and you know that things aren't always good in the realms of turning men into wolves. This film goes with a more realistic approach and do not elongate the face like you see in "Howling" which was definitely exaggerated in a lot of different ways. There is no crazy transfer and the u can distinguish between the beggar and the wolf.

At this point we start getting serious character development and story, and the majority of viewers will just go to sleep, because the film is treated as a serious thing, instead of a scary and obscure horror film. With movies like "The Howling" we saw some serious dark tones involved with the exploration of the werewolf idea. This film doesn't have that, you don't see a lot of smoke and mirrors, and you aren't mysteriously led into transformation sequences, sexual scenes, or anything that you might want to think of in terms of recent werewolf films. It's just tone down in a lot of ways, and you might not enjoy that.

The best part of this film for me, is the ending, when the werewolf gets tore up, he acts like an animal! Seriously, he gets shot and he jumps around like a real life animal, which made a touch of realism to an otherwise non existent romp through horror.

Is The Curse of the Werewolf Scary? No. This movie isn't really that scary. Sure there are horror elements, but for today's horror aficionado's this film doesn't create enough mood to scare. In 1961, this film was censored in a few frames upon release, and was recently restored when released for dvd recently. So maybe it was scary at one time, but overall this isn't as scary as the other Hammer Horror films. This is not a vampire film, and this is toned down a lot in comparison to any modern day horror film.

I'm going to go out on a limb here, but I really think that this film would be an ok introduction for children and horror film. The movie has such a slim line, stream of horror that a child would find somewhat scary. If you watch this with your child, you might have to explain that werewolves are not real, but you won't have to explain a ton of other things. There's not a ton of innuendo, sex, and gore. So this movie in 2009 seems a lot like a "Goosebumps" book rather than a real horror film. You really have to put your 1960's hat on and consider the time that this film was in and enjoy it. Don't approach this film thinking that this is a horror, gore, and sexual fest. While there are arguments that can be made in regards to that, they are tame and done with a sense of taste and class, so you might not even see them coming.

This 1961 Hammer Horror film is really cool. It's a cool film. Hammer Horror's The Curse of the Werewolf is a tame horror entry, but it was scary at one point. 40 years ago this thing would have scared a lot of people and rightfully so, but I think I nailed it on the head in saying that this is really tame in today's standards. It is even probably something that I'm going to show my kids as they develop their tastes into horror movies. Check this one out, but don't expect a thrill ride, it's really slow to develop and the action doesn't make the film, the acting makes the film. I know, that's a strange thing.