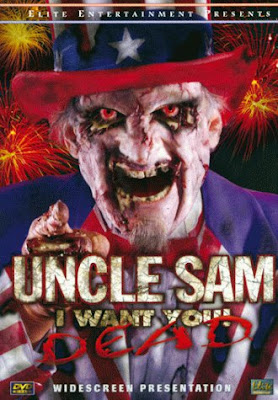 Quite possibly the only 4th of July Horror movie, and it's a doozy, Uncle Sam want's you dead! This movie is definitely a good way to kick start your July 4th celebration, and since there aren't a whole lot of different holiday themed films in the horror genre for independence day, here's a shot in the arm for those that needed a little help with the doldrums of having to be patriotic.

Uncle Sam has an interesting premise, an Uncle Sam killer is on the loose and he's killing anyone that is unpatriotic, and deserves punishment.

You'll have to hang on, because this film takes a while to set up the gore and violence. The movie revolves around a soldier that has been found dead, after a long search, but he turns out to be undead! Armed with some stilts and an Uncle Sam costume, the ultimate patriot is terrorizing anyone that is unpatriotic.

Much like other horror films in the slasher genre, this thing is on rails. You know exactly what is going to happen, and you get scenes that aren't too shocking, and you just wait for the kills to occur. The gore effects are above standard, and I liked that aspect of the film. Even though the film was made in the late 90's the film grain stays true to the genre and it looks better than 90% of the straight to dvd releases in the genre today.

The gore is all you need to know. The film is not great, it's not even good, but there are a lot of cool death sequences that makes this movie a must see for 4th of July, and no other time.

Uncle Sam is NOT SCARY.

This film is boring for a good portion of the film, but if you're searching for July 4th Horror Films, this is going to be your #1 pick.

If you like Troma films, this is going to be awesome for you, otherwise, it's a poor excuse for a film. Uncle Sam is also available in BLU RAY...don't know why.