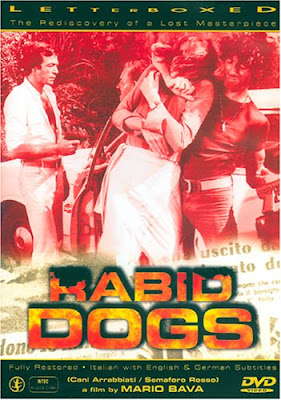 First and foremost I'm back. I bought a blu ray player, I bought DVDs and I am a member of a cool Los Angeles based video store that has a ton of horror, euro trash and yes British Horror!

Today I'm going to try and put into words a review of the Mario Bava film, Rabid Dogs. The first fifteen minutes are enough to convince you that this film is a top notch thriller! We get a robbery and a car chase and a group of bandits trapped by the police. We also get a glance of red, bright blood and quality gore that's done in a more tasteful way than other Italian contemporaries doing horror/thrillers. The movies tone, editing and style screams Italian horror and the music draws you into the narrative as the villains try to escape from capture with a load of cash. The music is menacing and steady as the plot is revealed. I can see where guys like Tarantino steal plot ideas, because this film starts feeling like Reservoir Dogs with each argument.

The movie has a simple plot that starts fast then slows way down to allow for the build up of suspense. The criminals hijack a car after the initial slaying and robbing and trapped are a couple and their baby. The killers then go on a road trip with these folks and things slowly build and eventually explode into a frenzy.

Bava doesn't create a scary film here, unless you reduce the common denominators to a very personal level. The acts are terrible on a human scale and yes I'm scared that the realism placed here could spur paranoia for me while driving, but still allows for me to remember that this is only a movie. The mood flows well even when the film starts to stall, but the music allows for smooth transitions.

More so a thriller than a horror film, Rabid Dogs has a strong dramatic third act that really makes you question who the bad guys are. The decisions made are interesting and deeper than mere kidnapping, forcing you to examine morality when there should be a clear line of delineation.

The film moves through a variety of layers, all of which build to a satisfying ending, albeit somewhat desperate if you ask me. Bava creates a masterpiece here that's tight, well crafted and worth watching again and again. It's vicious at times it's got some blood, but the layers are what make this film better than the last Bava film I reviewed for this site. Rabid Dogs is a harsh thriller at times, but it has a certain horror flare that will attract a wider audience than just the core horror fans. I liked it, I thought it had a good sense of pacing, even though I complained about the timing at one point, and thing it's a worthwhile film to watch. It's not going to scare most, but it has enough momentum to swing a hammer at your skull. Check it out on dvd.

I wanted to finally update this blog because I have finally settled in. I am no longer married, and I'm living in my mothers house in Los Angeles. I'm broke, I have no job, and I just now got a television. Tonight, I'll be purchasing a Blu Ray player and will start watching horror asap. You guys will get your horror fix sooner than later.

Until then, please buy something online to help me out in the transition. Thank you!

A Blade In The Dark And I'm Coming Back 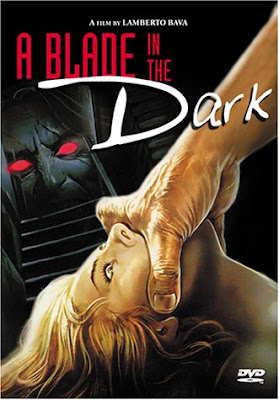 I won't get into personal details, but my schedule is a big foggy for the new few weeks.

I did manage to watch a horror movie recently, and it was Bava's "Blade in the Dark". I'll comment quickly that, this film was laughable. The blade was more of an xacto knife, and the pov shots were hilarious and stupid. The film holds no major horror scenario, unless you really suspend disbelief.

I loved it, but it's cheeseball at its finest.

I'll be back to full reviews in the coming weeks.
Posted by Jay dune No comments: