This week I picked up Vacancy for $1 at my local book store. It was used, but in watchable and likable condition. The film isn't the greatest ever, but it's straight forward and has some brutal sequences including some of the best revenge parts of any grindhouse film. I love the cameras towards the end of the film and the car exploding through the motel...oh man, I think I might have to watch it again. 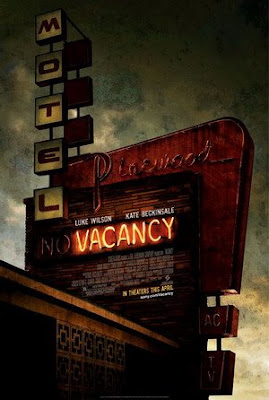 Vacancy mixes horror elements and gore to provide a good overall horror film. The movie surrounds a couple in the midst of a road trip, who run into some car troubles in the middle of nowhere, out in the middle of nowhere. They are basically stranded and end up getting a room in a nearby hotel, which they have conveniently ended up in front of. They talk to the front desk, and the clerk is super rude and not at all cool, and after some banter David (Luke Wilson) finally gets a room and the two end up in a seedy motel room together. What occurs next is like a homage to classic horror stories and movies from the past, as they put in a tape of what seems like their room, only a different couple getting snuffed out. Turns out that the motel does in fact film snuff films, and they are the next couple to get in on the action, and the clerk is involved. This film turns into a great piece of horror cinema, but only if you hang in there, it is a slow burner. The acting isn’t exactly great, but if you hang on, there are some crazy scenes.

Luke Wilson can seem boring at times, and his deadpan reactions really are hard to swallow, but then again, I think about myself in his predicament and I might end up acting similarly.

Here is a trailer for the movie Vacancy:

I have some problems with this film, I admit it. The movie is relatively short, and only the last parts of this film is really good. The director creates a lot of mood with some slow moving shots, and we get treated to some great moments when the couple fights back with all they’ve got. Proving once again that the human spirit can not be broken easily, as David goes to hell and back trying to survive what seems to be his last moments, including driving a car straight through the hotel room and killing a guy, pinning him to the wall! You have to see this scene as it really got me riled up and I was cheering for Luke Wilson at that point. 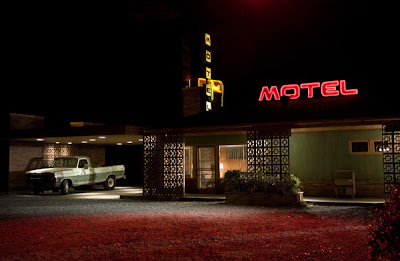 There are some great quirks and good dialogue, but that’s not without its problems. Sometimes this movie feels like an episode of Tales from The Crypt, and not a full length studio horror film. There are also lazy points in this film, where the director seemed to have given his assistant the camera and slept under his chair. If you can see passed those blemishes, this movie seems to be the sibling of some other crazy slasher films that were relevant in the 80’s. I admit, this movie does get the torture porn moniker for no apparent reason, but I could see where that argument is relevant. I won’t immediately sweep that idea under the rug, but this film has a lot more to offer in the scary department than most people seem to realize.

Vacancy is not a straight forward horror flick, and it is not the goriest, it is not the best, but it offers enough entertainment for you to enjoy and it even spawned a sequel that should be out sometime in 2009.