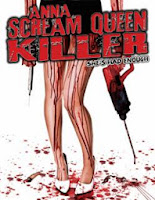 Chemical Burn Entertainment has been sending me a lot of stuff and I am a terrible person, because I keep forgetting to review their stuff. But that is all changing because I’m now starting to watch things and the first one is this one, Anna: Scream Queen Killer. This release had a lot of upside at first glance with a lot of cool things to consider. The synopsis was interesting, the cover art is good, and then what you get is something that you may not expect.

The movie is essentially one woman’s tour de force performance about being a scream queen in the world of horror. It starts with her auditioning for a part and going through a lot of the motions that many actresses probably deal with. As the movie progresses however, she is asked to do more and more extreme things until things get really bad. The more she goes into the audition, the more sinister things become and the more she ends up doing against her will.

After while she starts to get asked to do insane things, bloody things and well she is trapped, kidnapped, raped and tortured. As the movie progresses, she has to fight back and eventually things start looking better.

The synopsis aside, this is not a great film. It’s a boring romp that takes a lot of will power to watch all the way through. It is a very low budget affair, and it features a lot of dialogue with one person and a camera. It’s very much a POV type of role that is not too entertaining at all. I found that the star, Melanie Denholme has done a good job here but it lacks progression, cinematography and compelling plot points and separations. It’s a good idea, but it’s not executed well. I didn’t really like it, and don’t know a lot of people that will love this film. However, that is not to say that you should try, give it a shot if you love horror, as Chemical Burn is trying hard to unleash the best and sometimes worst in horror movies and independent film. They are doing more than I am, that’s for sure. That is worth commending. Melanie Denholme makes this movie watchable, but it’s not easy. I wouldn’t mind meeting her, and discussing things, but alas, I’m a blogger that has no real power.

Looking for grindhouse, horror, or sci-fi films? Please check out our amazon astore featuring all things horror. Don't trust astore? Check out amazon.com, surprisingly they have more grindhouse,horror,and rare sci-fi than you may not have thought possible.
Posted by Jay dune 3 comments:

The Children of Gavrilek For Kindle

Kindle has really opened up the gates for authors that are very talented, to release books that you may have missed out on. The Children of Gavrilek by Julie Kirton Chandler has proven yet again why everyone needs to pay attention to Amazon’s reader. I found this book to be quite compelling and showcased a variety of interesting twists and turns. What seems to be an adventure tale is so much deeper. It not only resonates with those that want a thrilling ride, but it speaks volumes to those that appreciate science fiction, and even a touch of romance which gives this a good sex appeal amidst a story that is full of depth and character.

Chandler creates a rich tapestry of multi-layered characters and right when you’ve pegged their origins, and stories you are confronted with something new. From Audrianna’s past to Devon’s origin, you will find that there are things found in the subtext that you need to pay close attention to or you may miss out on. It’s for this reason that The Children of Gavrilek is perhaps one of the better books you’ll find that doesn’t conform to only one genre.

There is so much found here, especially within the first few pages, which are easy to read, and resonate with visual language that you may be hard pressed to believe. I know, I know, I’m waxing poetic here, but it really is something worth your attention. It takes you through the ups and downs of what it means to be human, and also throws in a science fiction spin that you may not be able to compare to others.
Posted by Jay dune No comments:

For the Love of Horror Movies

My earliest memories of horror movies takes me back to Gardena, California. My mother owned a beauty salon and she would pick me up from school and take me there for her night shifts. She let me rent movies from the video store across the street, and I would always pick horror. Her lack of parenting skills or discretion let me play whatever I wanted in her salon and she spoiled me so much. I miss those days. The horror panel of movies I would play were shown for customers and myself alike. She always seemed to have people helping her, and I always had a television up high to look to up to. It was those days that really make me miss childhood, because that’s where I first started to love the world of scary things.

Fast forward to my 30s and I find myself less in love with horror movies than ever before. Perhaps it’s the fact that I work 80 hours a week, or maybe it’s just that I find the genre saturated with boredom. I don’t know what I am going to do in the future, and it sucks. Perhaps the scariest thing is not the movies and the plots, but the fact that life gets in the way of art and entertainment more often than not. If you’re not taking any time off, the scary things in life set in.

Depression, anxiety, sadness, and all sorts of negative emotions set in and you have to fight your way out. I have been fighting for so long that the messages in horror movies start to become real. It’s an odd place to be, but there’s something still burning inside. I’m not sure what it is, but there is something that keeps calling me back to this website, this blog. As I’ve stated before, this page has lasted longer than my marriage did, and it will most likely last longer than my current relationship, if I just keep writing.

If you’re waiting for my next review, or just want to help me come back to full time blogging, I would highly suggest that you follow the links posted all over this page and purchase some items from amazon. If you don’t have time or money, then click through links and bookmark them. I need the cash flow as I’m struggling to even breathe at times. This blog was created for the love of horror movies, and will continue to be that, as long as I can get myself to post another piece. I will sooner than later, that I promise.

Looking for grindhouse, horror, or sci-fi films? Please check out our amazon astore featuring all things horror. Don't trust astore? Check out amazon.com, surprisingly they have more grindhouse,horror,and rare sci-fi than you may not have thought possible.
Posted by Jay dune No comments: