Here is an old post I wrote . It's 1,001 Books to Read Before You Die. I need a place to dump this, and here it is again. It originally appeared on sirjorge.com but I haven't had that domain in years. My apologies for the inte

I admit, I haven’t read nearly as much Stephen King as I’d like to pretend that I have. I have worked on several of his novels, and listened to a lot of different audio books. This is a movie that I didn’t really search out until now. I had some free time and wanted to see what it was all about. While I cannot speak to the collection of “Full Dark, No Stars”, I can at least talk about the movie as a whole, and well, it wasn’t what I thought. The marketing made it seem far more sinister than it really was, and while this is classified as a “psychological thriller”, I wanted it to be a full-fledged horror movie.

The lines are blurred in regards to horror movies today. “A Good Marriage” was marketed as something of a horror movie, but it’s ridiculous how neutered this movie seemed. The movie is a tightly wound film that really is fascinating at first glance. I tried to give it a lot of attention, and some serious thought, but it was a slow moving train that led to nowhere.

The premise is interesting enough. A wife finds out that her husband has a creepy secret. She figures out that he’s a serial killer and now must do one of two things. Tell the authorities or keep it in and just roll with it. The movie moves slowly into a psychological push, and eventually the climax reveals so much more. The most interesting part of this movie was the private eye that is on to the wife’s secret, or rather the husband’s secret.

The movie parts of this movie are slow. The processing seems a lot like a “lifetime” movie, rather than something that is supposed to be for theaters. Even though this was released to movie theaters, it isn’t really on par with the best in the business. This is NOT Stephen King’s best adaptation. “A Good Marriage” has some good moments, but more than ever, this seems like cash grab.

You can take your chances with “A Good Marriage” blu ray, or you could pick up “Full Dark, No Stars” for cheap. Either way, you can figure this one out on your own. I’m not a big fan of this movie. It just didn’t hit me like I thought it would. Joan Allen, Anthony LaPaglia, and Kristen Connolly do well enough, but there just seems to be something missing, and I can’t really put my finger on it. It happens from time to time.
Posted by Jay dune No comments:

Why Watch Movies Then?

Recently I had a conversation with a so called movie fan. It reminded me of the time I made fun of Vincent Price and someone decided not to be my friend over it. There’s a lot of movie fans out there, and then there are some that deliberately want to make you feel as though you’re wrong for liking something. Furthermore, they want you to know that they are SO sure that the director and the cast are “blow hards” and are trying too hard.

They say that they are “bored” and they keep watching. They want you to join in their misery and try to shoehorn the notion that you’re an idiot if you disagree. But they do so in a passive aggressive manner, to the point where you ask yourself:

“Why watch movies then?”

Seriously. If you’re bored, if you hate the director, if you’re going to call someone pretentious, why not look in the mirror? Where is your movie? Honestly, if you’re such a grand critic, where is the movie you made?

Oh? You didn’t ever make one? You’re an entitled viewer aka a consumer? I hate movie buffs. Those that don’t even know what they are talking about because they haven’t seen half of the things that they think they have, or should. They’ll wax poetic about nonsense, and then when you ask if they have seen anything remotely interesting, they clam up or move onto something that they are an expert. Obscure television movies? Yeah, I can’t see them, but you have? And you’re an expert so you want to make the world feel bad for not doing so?

I’m glad I have this blog, and I’ve made some claims. But at least I back them up with a lot of effort. I have been in the business, I have made movies, I have ghost written, and I have spoken with so called “blow hard” directors. I have tried my best to see past the idea of pretense. But I’m wrong, right? I’m just a dude, that is supposed to let it go.

My apologies for the rant. I’ll get back to watching and reviewing horror movies, of course, I’m a critic but at least I’ve tried my hand at movie making. My apologies for the negativity I’ve shown in the past, I try to watch and love everything, sometimes it’s just hard to sit through the latest schlock fest, though. You can, you can love it, but don’t trash the efforts of the artists, maybe they are trying really hard because it’s their passion. Why piss on the passion of others and call people out personally? You don’t even know them? 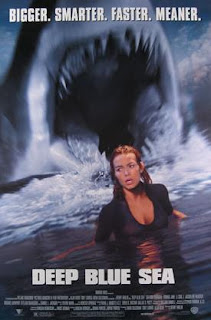 I know I promised to talk about the Leprechaun series, but I have been having a hard time transitioning. I moved from Los Angeles to Indianapolis, and my hopes of meeting new people, and having a different life has really been thwarted by the same issues I’ve always seemed to have. If you want to help me out in any way, make sure that you use the Amazon options that I recommend to pick up movies. Each sale helps me out a little bit. That’s partially the reason why I am not writing as many reviews, as I don’t have a way to watch more movies, now that I do not have Netflix. I did manage to catch “Deep Blue Sea” so here I go, giving you another shot in the arm from the longest running horror blog that I know of, because I don’t know about a lot of others!

This movie takes the concepts that you may have seen in first person shooters and takes on “Jaws”. There’s a secret lab where scientists are working with sharks, helping them get smarter, in order to cure human disease. However, during the course of their work, they have caused a great deal of problems. Mainly, the sharks are now getting mad and know how to fight back, or whatever. The movie doesn’t really take off until the sharks starts to go mad and traps a research team. The team must escape, and overcome their own personal issues to rise through the flooded research center.


So while this movie isn’t scary, it has horror elements that are supposed to “thrill”. It’s listed as science fiction, and it truly does put on a showcase. I can see this as a pulp novel, and it truly works well in that regards. The characters are all archetypes. Thomas Jane, Michael Rapaport, LL Cool J, and Samuel L. Jackson are the stand outs, especially the ultimate death scene! The biggest death scene here is of course Jackson throwing down an amazing speech, only to get eaten by a shark! I loved it, you loved it and the internet meme’d the crap out of it.

Breaking down this film into anything other than just a throwaway blockbuster is disingenuous. I can’t really say that this is a bad movie, because it’ not “bad”. But it’s not exactly great, or good either. It’s a nice romp through a very isolated area. It’s nice to get a throwback to that classic science fiction style that made the 1960s so grand. However, outside of some shining lights from Jackson and LL Cool J, this is a trope that is so predictable, you get tired.

You either love “Deep Blue Sea” or you don’t, it’s that simple. I found it to be funny, and enjoyable. However, it may be fueled by the fact that I’m having a hard time financially, so it was nice to have a distraction for a couple of hours. You can pick up “Deep Blue Sea” on BLU RAY here, or don’t, no one ever listens to me anyways.
Posted by Jay dune 1 comment: