John Dies At The End Review 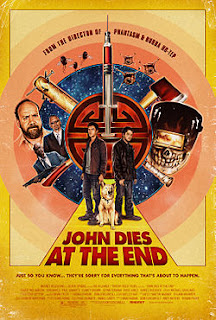 There are a lot of horror movies that come out on a regular basis and no one sees them. This is one of those many releases that no one cared to see in theaters, but alas the world of dvd and streaming can be glad to have another movie to watch and review. I myself finally caught this one, and after I wrote about the release of David Wong’s other book and of course this book as well, it’s about time. Clumsy sentences and bad reviews aside, I found myself watching this one in wonder, as it is truly an original take on a not so original genre, the horror one that is. John Dies at the End is the focus of this review, although I’m a bit tired from making less than minimum wage, applying at jobs that don’t call me back, and wondering where my life started to tailspin in terms of getting ahead in a career path. Heck, I have no career, who am I fooling?

The film is a complex and winding tale about a couple of friends that have found a drug that makes things come to life in a way that Hunter S. Thompson would be proud of. The whole movie weaves around a guy telling a reporter about what has happened to him in the past, and how he came in contact with this insane drug known simply as soy sauce. It is killing off anyone that comes in contact with it, but not before extreme hallucinations and other off setting problems happen.

Throughout the film gags of all types happen and you get to see a great deal of gore as well. In an effort to hasten the pace, you get a lot of intertwining elements, none of which seem to make sense and the whole pay off does a poor job with revealing what the hell is going on. I had more questions about the plot and where it was going than I usually do, and by the time things started to make a little sense, a giant eyeball was eating people. John Dies at The End is definitely a movie worth watching, however, it is not worth asking any questions because you will receive no major answers.

When it comes to finding original horror movies, this is definitely a good one, so make sure that you venture out and watch it, then try to figure out what is going on. The ending will come out of nowhere with an epilogue that is fitting, all things considered. 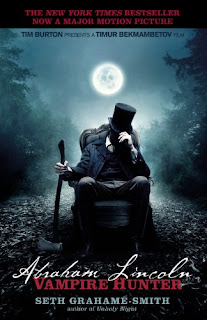 I was supposed to be working on Chemical Burn stuff, but their ROKU app decided to quit, and I haven’t had time to look into their screeners that were sent out, so I’ll have to settle for this update, or rather you will have to settle.

There are a series of novels that are essentially rewritten historical accounts of the lives of iconic people and places. This altered history happens to throw the 16th president into the role of a vampire hunter and while most people may not be so quick to say the premise works, the movie does a good job of making the basis for the novel, quite compelling to say the least. With that in mind, the following review is of Abraham Lincoln: Vampire Hunter.

The movie does a good job setting up the hero with the death of his mother at the hands of a vampire, than subsequently goes through some years of his training at the hands of another bloodsucker and the story starts to really move into a fast paced actioner, although it has horror elements. The movie plays more like an Asian cinema Kung Fu epic, but still maintains a certain sense of creep factor here and there. The muted and goldenrod filter on the cameras is a bit annoying, but otherwise, you get a full framework of what could have been a biopic done right. Of course the sensationalized action is something that probably never was a thing for Lincoln to deal with, but then again, his favorite sport was professional wrestling, so maybe he did see some action of this nature.

Overall the film has a good sense of humor about the whole thing, while maintaining serious tones for the slaying of vampires here and there. The slow motion is somewhat distracting and the constant computer graphics and design is not my favorite. However, the producers did a good enough job to get me to forget that and start thinking about whether or not some of the fight sequences were in fact possible. I had to remind myself that these things are NOT reality and are part of a horror-action movie, so maybe they did a good job after all.

Abraham Lincoln battled zombies before, he battled slavery, and most likely enjoyed some of Hulk Hogan’s favorite matches. (Seeing as though Hogan is sooo old, eh? Eh?) I liked this outing, even if it did have some slow motion fighting, but I liked it none the less. I thought it was interesting and it kept me awake, which is something that many other movies haven’t done in a long time. I’d suggest watching it and reading the book too.