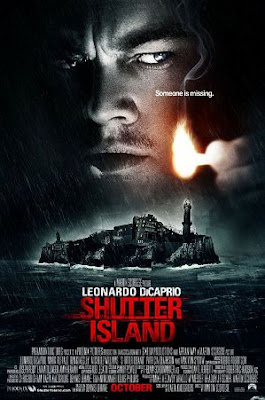 It's not often that a mainstream film actually gets scary, but to my surprise, there were some moments that actually made me think that mainstream Hollywood might know what they are doing, then the “on rails” type of story made its way to proving me right again, and dare I say it once more, I HATE IDENTITY CRISIS MOVIES! Shutter Island....2 hours of interesting film making and about 8 minutes of trash.

Shutter Island is one of the biggest films of last year, and it's quite interesting to see Martin Scorcese and DiCaprio together in what seems like an easily predictable film. The plot surrounds a couple of detectives on a mental asylum that is located on an island. They are looking for a missing patient, and one of the detectives wants to get to the man that burned down his house and caused the death of his wife and kids. This is one screwed up story line, and for the first hour or so, it takes a while to set up.

The film visuals are impressive on this film. It's a throwback to start, and you can immediately draw ties between Alfred Hitchcock and Scorcese's film style as the two detectives stand on what seems to be a “fake” ocean background. I really liked it, I don't know why, but it just had a simplicity that isn't really seen in a lot of film today, at least not done so well. The movie moves through a lot of visualizations and while there are CGI moments, I found them to be artful in their use. There's one sequence where blood flows in a natural way tying together a surreal instance of horror and emotion.

The film takes a while to set up, and the pacing is quite good, revealing more and more pieces of the puzzle with some clever acting from Sir Ben Kingsley and Mark Ruffalo. By the time the movie starts to reveal the inner dimensions and the final sequencing starts to fall apart, you're completely enveloped into the story of a man wanting revenge, but only finding out that what he thinks is real, is not.

Is Shutter Island A Scary Film?: Yes and No.

There are moments where this film has a morality tale that is quite scary. He ends up finding the man he is looking for and has a chance to beat the hell out of him, but instead, he finds that he may have already done something to him, and therefore things go awry. I was reminded of “repressed” memory and the film “Session 9” which had a similar notion of memory and repression.

There are other parts that are scary as well. The visuals aren't scared, but the idea of losing your mind and repeating a sequence through combat shock, and other ideas really make for some scary things. When you begin to see the psychology of the main character, and find out that he might not really be where he thinks he is, and the whole film starts to derail, you start to seriously question your own reality. It's an existential nightmare, and it is done quite well, until you start to realize that it took 2 hours to get there.

Shutter Island does a lot of great things. I loved the way it looked, the classic throwback and mental break down that occurs in the film. However, the whole identity crisis plot point really upsets me. I didn't really like that, and I've never really liked it. While there are a few moments where I thought it was clever, the final moments weren't that good. The final lines are quite good and when you listen to them, you start to realize that this film is much smarter than the plot twists, and I enjoyed it. I recommend it, but I'm not saying it's amazing, but it's better than 90% of the films I've watched in this film.

Maybe this film wasn't supposed to be so scary, but oh well.