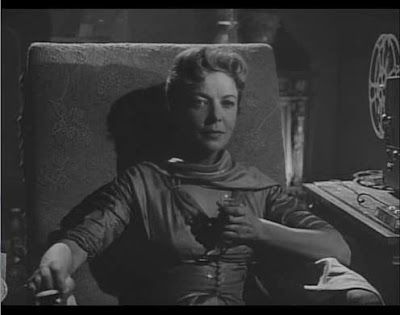 Just when you thought I had thrown in the towel, I come up with a new review for you 2 readers left. This time around, I managed to watch an episode of The Twilight Zone from 1959, the first season. This one came to me right after watching Hot Tub Time Machine 2, which can be easily one of the worst sequels ever made. Regardless, this episode of the pivotal television showcase came out on October 23, 1959, and it starred Ida Lupino, Martin Balsam, Jerome Cowan, and Ted de Corsia.

Four Episodes Into The First Season


“The Sixteen Millimeter Shrine” is the fourth episode in the first season of the series, and it hinges on what many Hollywood stars must go through. An aging actress is watching old movies of her performances, and wishes that she could go back to a place where she was wanted, adored, and the likes. As her days go on, she is in the darkness, drinking, and just doesn’t really go out. When an opportunity to star in a new movie comes about, she jumps at the chance, but recoils when they ask her to play someone more her, “age”. She goes home and is depressed. In her depression, she decides it’s better to go into the screen and live with the past. Well, in The Twilight Zone, anything is possible, and that’s what happens. Barbara Jean Trenton jumps into the screen, and that’s where she stays forever.

Do Actors Wish For This?


This television showcase is an interesting one. It reminds me a lot of what many older people go through. I met a lot of aging rock stars in my day, and a lot of them act the way Trenton acts. They want that old glory, but they don’t want to admit they are old. The same goes for action sports. A lot of professional skateboarders are dealing with issues of this type. It’s a sad state, but it’s a true state. It got me thinking. What about me? Will I be there? I’m already there, who am I kidding. I used to own a record label. I used to have a huge record collection. I had a lot going for me, and now, I’m battling anxiety and depression on a regular basis, without any health insurance. The struggles of a writer are real.

Oh, the episode! My bad. Overall, this is an interesting episode. It features that nostalgia of past experience, mixed with the present realities. What if you could escape? That’s the premise. Would you live in your greatness and that’s it? I don’t know. The escapism attached to former glory is incredible, even if you only tasted it for a second. Sometimes I wonder what it would be like to get a second chance at being a record label owner. Then again, I’m a writer. I can dream up a lot of things for myself. But as far as this episode, it’s a good one. It has good acting, clever pacing, and that classic twist you’d expect from Serling and company.

Ida Lupino Is Quite The Actress


Is it my favorite thus far? No. It’s only 4 episodes into the first season. I do like the camera work, scripting, and acting. At one point Ida Lupino behaves drunk, but ever so slightly. You’ll have to watch how she plays it in the agent’s office. There’s a subtly to her movements and it’s stellar acting. Ida Lupino died in 1995, but man did she have a beautiful face in 1959. Such a good actress, and famous too. Anyways, this is a good episode, and I enjoyed it. You may like it too. 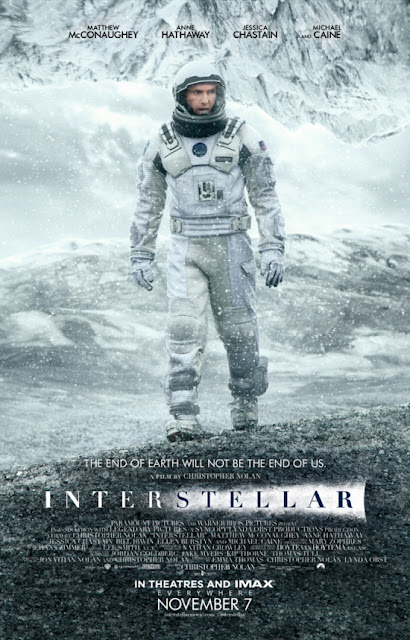 I didn’t want to watch Interstellar when it first came out. I thought it would be boring. So I didn’t watch it until it finally came out to streaming. After seeing it, I can definitely say it is one of my favorite science fiction movies. If I had a top 3 for last year, I would say that Ex Machina, Elysium, and Interstellar as my favorites from the past year. Whatever the case may be, this is a movie that deserves your time, even if some may say that it’s too long. Interstellar is one hell of a movie.

The movie has a complex premise. The world, in the future, is getting dusty and farmers are going to have a difficult time feeding the world. NASA needs to send astronauts to other worlds to get data to inhabit another earth, or humanity is doomed. Meanwhile there’s an issue going on at a former pilot’s house. A smart daughter, a dumb son, and their future seems to be pushing forward through life, setting up something grand for the future. Now, there’s a subplot here involving a ghost, and the first lines of the film give away that, but most don’t realize what is going on, so they keep going. The movie then pushes forward with our astronauts heading to a new planet to see what is going on.

In the course of over 3 hours, we meet our astronauts, NASA, and much more. There are surprising elements, including a villain that is cryogenic freeze. A fist fight on another planet, and an incredible tidal wave that looks like a building. Science is explained often, and there’s even a video about all the science issues that are described in the movie done by Cinemasins.

You can purchase Interstellar on Blu Ray Here (amazon).

Interstellar is a long movie. It’s a long epic film that nods at Stanley Kubrick’s vision from the past, but gives you something new. There’s a lot of heady material here. It’s perhaps the most science heavy movie that I’ve seen, and really enjoyed the way the movie comes through. The larger picture is a lot more villainous than meets the eye, and it’s done in such an interesting manner. Christopher Nolan pushes the limits here, once again giving you a visual feast. The movie is spotless in a lot of ways, and deserves to be seen in a large format. Imax would’ve been absolutely splendid.

The movie is hard to watch if you’re tired. It’s not action packed. There are no explosions for the sake of it, there’s nothing that you would find in a Michael Bay film. There’s a lot of layers to this movie. From science, cinematography, art, and acting. Even though there are minor gripes, the majority of the movie’s focus on love, loss, distance, time, science, time travel, and visual design is epic in scope. It’s for this reason why we go to the movies. I was more compelled by Interstellar than ANY Star Wars film ever made. There’s a reason why this movie lost so many, and it’s an intelligence factor that wins me over.

There’s fear in this movie, a real fear. You’re going to sense it as you get into the isolation that the astronauts are in. The performances are done well, including the future, past, and present. I am once again completely flabbergasted by Matthew McConaughey’s performance. Anne Hathaway is good, Jessica Chastain, Michael Caine, and Matt Damon put on a showcase. There are some other great performances here, but this movie really does great to showcase the power of acting, and cinema as a whole.

Interstellar is a heady film. It’s on the same par as Primer and Timecrimes. Two of my personal favorite movies. You have to check this one out. It’s a beautiful movie. It’s available right now on Blu RAY and quite a hefty movie. It is more than just a science fiction movie, and you’ll see it when you decide to settle in for the moody dialogue and more.

Check out Cinemasins below to see spoilers, and science notes about the movie.