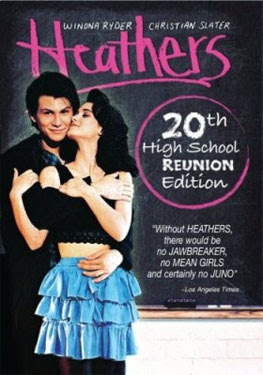 Ok, the box does make this look a lot more "comedy" than horror, and I'm an idiot.

One mans black comedy is another man's horror movie. That's precisely what I'm going to try and explore in my return to reviewing horror movies on a regular basis. The first one up to bat, didn't scare me, but there is no way in hell a studio in 2011 would green light this one, the movie is Heathers.

The film portrays a group of girls that are part of a clique, and it's interesting to see how this film could become another high school, coming of age film, but no, there is something sinister brewing. As the black sheep of the group starts to fall in love with an outsider, things start turning sinister, with the two love birds committing crimes together, and as the world starts to burn, our heroine has to decide whether to continue the sinister suicide plan, or stand out as queen of the Heathers...in an ironic twist of an ending.

First and foremost, no one is going to agree with me that this is a horror film in disguise. That's fine. But consider the actions taken by the film's characters. We are not only treated to a lot of subtext, we get to see taboos broken here. Teenagers in a school shooting others! That's why this film can not be released again today, as it would upset too many parents of students involved with shootings at school. I'm not condoning that, but I'm saying that this piece of art is far too graphic for many, even though the violence is played down a lot. If a horror movie director had a shot at this film, it would have more gore, especially with the serial killings involved in the film.

Christian Slater turns more and more sinister as the film plots along, and despite the name "Heathers", this film really takes a left turn in the third act. You no longer remember why there was a clique to begin with, and the subplot takes over, and throws the viewer into a nightmare world of zombie America.

Heathers is a black comedy, but it has some very serious underlining messages that are often missed by film reviewers. The idea of ritual suicide, murder, cover ups, all dealing with teenagers is not something film explores in a serious manner, unless you count "The Virgin Suicides" but that came much later.

Heathers might not be a go to horror film, but there is enough here to make an argument, and I have failed to even scratch the surface. I never said i was a good reviewer, but at least I'm back. Thanks to no one being around on a friday night, so much for being young. Maybe I just am reaching at straws, but hey, I got lonely and wanted to watch a movie, and this was the one I picked...sorry. I'll return to blood and guts with the next review, and it won't be British.

Where Is Sir Jorge

Wow, I never thought I had to do another status update. First and foremost, thank you to anyone that has still stuck around. I know I haven't updated in quite sometime, and I apologize for that.

1. As many of you know, I got divorced. My wife and I split, and I have been depressed, severely. I at one point, thought my life was over. It is essentially a nightmare right now.

2. Writing. I have been writing for a living. I have to stay on the grind to make a minimum wage. It sucks.

3. Lack of motivation. I've been lacking serious motivation. I have written on this site for about 4 years and tried hard to make a little extra money, so it's disheartening to see it not working. I know, I'm selling out, I have to unwind my thoughts.

4. Updates are coming. That's all I can say. I don't know when, or how much, or anything. But this site is NOT DEAD! Stick around, please.
Posted by Jay dune No comments:

I was fortunate enough to be sent a copy of this film, and upon first glance I wasn't sure what to expect. I was floored with the opening sequence, as it took you into the horror of what a snuff film might look like. The grainy footage and sexual act in the opening really punches the viewer in the mouth, and what would you expect? The film is called Snuffed.

This independent film follows an investigation of a serial killer. The film is almost documentary style with film grain footage and voice overs pushing the story, creating an interesting tapestry. From the opening scenes through the rest of the film, we get this sort of pov interview style of a serial killer.

Aesthetics are key here, you get a very in depth interview and interesting narrative with jarring visuals and sickening points, you'll swear your watching a real life serial killer, making this film quite unique. The scary thing about this movie is the low budget visuals mixed with interviews, pushing the limits of your imagination. It's really a triumph in many ways, moving forward with real horror. I'd say Snuffed is the most unique independent horror film I've ever seen.

This film is not easy to watch for some, but for those that can stomach the voyeur style presented here, your in for a unique and horrific ride. I liked it a lot, it seemed real, too real for comfort.

This movie was produced by Michael Colton, and directed by James O'Connell. You can get more info by visiting crestwoodfilms.com
Posted by Jay dune 2 comments: