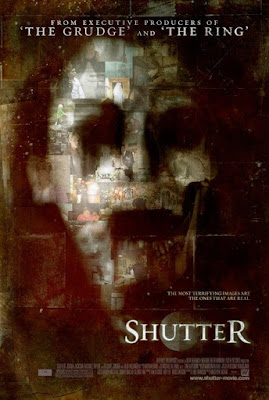 There is a great deal of horror and science fiction coming out of Asia. Specifically Japan, Korea, Thailand, Taiwan, and others. It's interesting to note that the good ones from those lands are repackaged, remade, and recreated at around pg-13, then getting an “Unrated” dvd release. This is no different, and while the first time I saw it, I was bored, this time around I actually liked it; some of it.

The film Shutter is relatively easy to follow and is relatively formulaic. The film follows a photographer to Japan, his wife and himself are enjoying the city and working out well, but as the film progresses our main character starts to feel odd things, and in his photographs appears someone from his past, little does he know, she is going to haunt him to death!

The movie oddly enough starts with a car accident. The couple runs over a woman, and that sets the tone for the film. The rest of the film plays out like an episode of the “Twilight Zone” and the ending is exactly what you would see from the popular series.

A majority of the film is spent looking for “ghosts” and “paranormal activity” among “experts” in the Tokyo area. They even visit with a magazine that specializes in photography that features ghosts and much more. This whole thing throws you off, and when bad things start happening, after a good amount of set up, you start to believe that the woman they ran over, didn't die, at least not all the way.

The gore effects, despite being pg-13 are higher than some of the rated R films I've seen in the past few years. I did enjoy the kills, even if they were only two, and understood the plotting, especially at the end when the whole film starts to unravel in terms of story. Joshua Jackson does a good enough job being that loveable loser at first only to turn into a conceited, stubborn idiot.

I didn't like that there was no way out. Sure, the main character and his cronies might be perverted and caused the rape of a woman, but she's killing them all? She's so obsessed with the American that she's haunting him? Really?

The film does look good, and I appreciated the overviews of the Japanese areas. The lights, the urban setting, and Roy from “The Office” was definitely cool for me to check out. I think there were moments that made me want to visit the area, and if I were given a chance, work there, but I snapped out of it when the crap hit the fan.

On a side note, I can't get the picture of Charlie Conway out of my head. You know, Joshua Jackson in the Mighty Ducks series. Speaking of which, what happened with The Mighty Ducks 4? I wish they'd do that one. 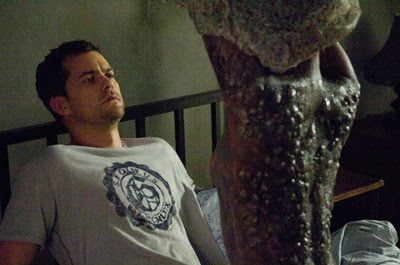 This film has some creepy moments, and I admit, I often wonder about photography and motion blurs. I've seen paranormal photographs, strange lights, and all sorts of weird things, but to the point of fear? Not really. This film does give off a weird notion, the idea of haunting spirits that literally weigh you down and punish you for your sins.

The remake is obviously “lighter” in a lot of ways than the original. I'll watch the original and confirm my thought, but overall, this remake is on par with the rest of the Asian horror remakes. It's watered down, it gets tedious at times, and you really have to throw out the rule book to enjoy it. While the visuals are nice, the story isn't nearly “horrific” enough in American terms to justify the remake.

I would recommend Shutter if you like the other Asian horror remakes, and if you're a horror movie blogger. Otherwise, I'm not so quick to give my whole hearted recommendation. However, I did buy the film, so maybe I'm an idiot and this film is better than I'm giving it credit for. Shutter is definitely watchable, but not necessarily a must see.