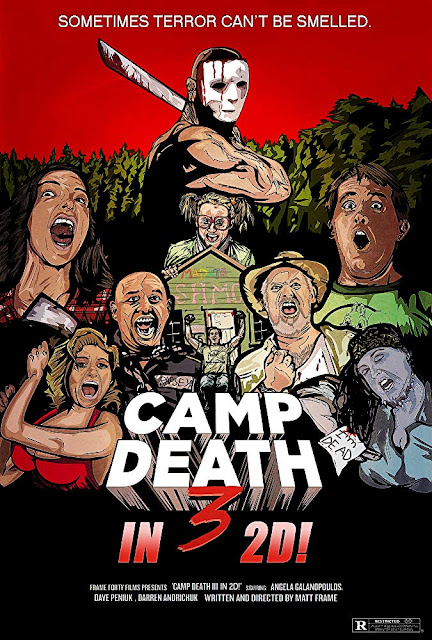 Two things happened to me this morning. One, I stabbed myself in the eye with my finger, trying to rub something out of it. Two, I saw “Camp Death III in 2D” with only my left eye. If you only have one eye, then you are no doubt going to enjoy the Scary Film O Vision that I experienced watching this movie that caught me by surprise. The director emailed me, and I normally ignore all directors, because they don’t want to give me money, and I need to pay bills. Director Matt Frame didn’t offer me money, but he did offer me a chance to see his movie, and after exploring my options, I decided, why not, let’s watch a horror movie, with a comedic element to boot! Plus, I’m a fan of the cast, and there’s one brunette in particular that I fell in love with, as she looks like my high school crush, and the one that got away, or well never came, because she totally ended up going out with my best friend and marrying him, and dissing me because I had no money, car, or a band. Oh, right, the movie, “Camp Death III in 2D” is a kick in the balls of parody horror movies, and boy, did it throw a lot at the proverbial wall.

The movie is a parody of Friday the 13th, yet it does a lot more to throw in all sorts of camp horror cliche moments, and then some. The comedy is played up as absurd at times, and sometimes it’s one liners, then you throw in the push towards POV shots, and gore, and you have yourself a movie that takes the notion of a camp horror movie and adds equal parts porno parody, sans the sex, and kaboom, you got yourself a movie that reminds me a lot of “Sleepaway Camp 3” in the lack of large cast, and some clever gore and killer shots that make you think this came out of the 1980s. If it had additional film grain, you’d swear this was a cult classic, mind you, it’s got those chops.

Comedy horror movies run the gamut of absurd to gross out humor, and then some. This movie plays on everything, but doesn’t go into the world of “Scary Movie” for laughs, as they go beyond at times, and really play up to the bad taste that comes with horror movies that are fully horror and fully comedy, not just parody. Suffice to say, you’ll laugh when appropriate, and you’ll be impressed at times with the sheer horror of it all, because at the core of this concept is a true to the source material, horror story of a slasher at a camp. That’s not to say the movie doesn’t have slapstick, it’s just that there’s still a sense of “horror” to this, not just comedy for the sake of comedy. Then again, there’s a Star Wars scene that will offend a lot of geeks, but I found great!

Right when you think the movie goes for strict horror, they throw down the gauntlet and go completely off the rails, so my previous statements are null, as the script calls for humor that cannot be contained in traditional means. You get into the WTF category of humor. Splendid!

You should go out of your way to find this movie. Show it to your friends, show it to your spouse, show it to your escort in Vegas, this is one hell of a horror comedy, and while it has some serious notes at times, it goes for the gusto in terms of trying to make you laugh and scare you all at the same time. It’s a dream of a movie in many ways, and I swore my teenage brain thought of this one, but alas, I was too busy doing random bs.

This is one hell of a comedy, horror movie. Watch this movie alongside “Black Devil Doll” and “The Taint” and you’ll have one hell of a triple feature! Learn more about this movie via the official Facebook Page HERE and check out the trailer below. I recommend this one, it has everything from straight laced horror to gross out humor to gore and more. It's something else, it's just something else....watch it!