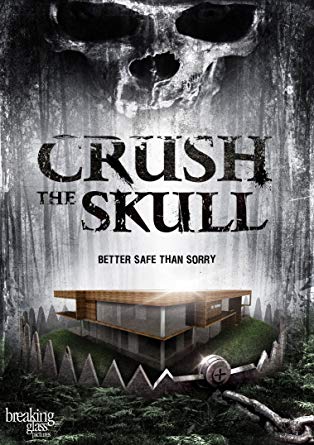 It’s always nice to see independent horror movies get funded. I didn’t know that this was a movie that had a kickstarter, and well, with the budget that they pulled from that site, the crew of “Crush The Skull” was able to create a horror movie that pushes the limits without going too overboard with the gore, then sets up a final twist that you may not see coming. While some people will think that this movie has a bit of derivative elements, it’s far greater than the sum of the parts. The reason why is simple, the acting and direction is handled very well, and I for one am impressed with the editing and some of the shots that were pushed through for the final result. “Crush The Skull” is a horror movie that may seem like another indie movie, but it has a few gripping moments, including a starting line that I didn’t see coming at first glance.

The movie is simple enough, a group of veteran thieves break into a house and think that they are going to ransack the place. But when they enter, they end up getting locked up, because this house has been rigged to not only capture them, but to torture them. While it doesn’t have the same kind of frenetic pace as “Saw”, this is a movie that holds you through dramatic components, and a focus on the tension between the party, escaping, and the next turn of the proverbial screw.

There’s not much gore here, and the gore that is found has a great deal of blood that is computer generated, or taken off screen. If you are looking for another horror movie that has a lot of gore in it, this is not for you. “Crush The Skull” is not meant to have that, it’s actually a bit more tension filled, and at times reminds me of “The Collection” more than it does “Saw”. Although, I’m sure that people will be throwing their opinions in the direction of the other trapped gore filled series.

As the movie unfolds we lose characters, and there’s a lot of classic one liners, comedic attention, and a focus on the coming storm. Throughout the course of the movie, the tension builds and builds into one hell of a finish, which gives you a satisfactory element, including a classic line about crushing the skull to make sure someone is dead.

“Crush The Skull” is highly recommended, and if you’re a horror fan, then you’ll appreciate the work that Viet Nguyen and his cast put together in this one. I was impressed with the visual design, and the tension filled horror that comes with this interesting premise, and execution.

You can purchase this movie online by clicking HERE, and seeing why I recommend it greatly.
Posted by Jay dune