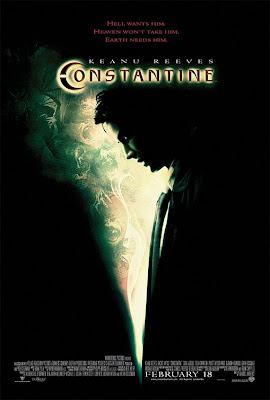 Hellblazer, the epic comic book series from Vertigo comics, gets a full film translation in this Keanu Reeves’ science fiction horror film. Constantine is somewhat scary, but is more science fiction than true horror picture, but it does share some horrific scene’s and therefore it deserves a closer look.

Constantine follows an anti-hero by the name of John Constantine, he’s a supernatural exorcist of sorts, and is trapped between heaven and hell. The movie follows a story arc of a suicide and Constantine is called in to find out whether or not it is in fact true. Along the way we meet a slew of uncanny characters, and face death and hell.

Here is a trailer for the film Constantine:

Constantine features a lot of computer animation, but it’s done fairly well and is faithful in a lot of ways to the source material. The movie follows a good pacing between straight action and horror elements. The initial sequences of exorcism are definitely poignant in their creepiness. The fear in the eyes of what I can only assume are Latino immigrants seems genuine, and the effects and textures involved are top notch, creating a very surreal and horrific situation that rivals any of the “Exorcist” films. The demon in the mirror takes away from the dramatic scene, but up to that point it’s quite the frantic exorcism.

The trip to hell is another great piece of technical green screen work. Constantine’s trip to hell leaves him smoky and ridiculous. This part of the film is like reading Dante’s Inferno all over again, as your imagination can’t dream up this sort of thing easily.

Constantine differentiates himself from other comic book hero’s by drinking hard liquor, smoking cigarettes, and driven into deep depression. With the “hero” moniker give to him thanks to Vertigo Comics, he has a slew of cool weapons that help him combat the evil that passes through hell onto earth. 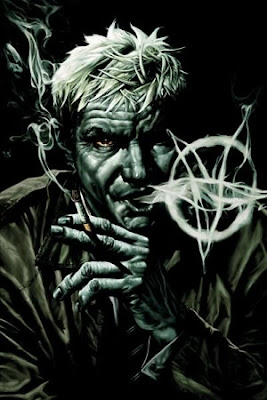 Constantine is not without its own faults. Keanu is not a glorious actor, and while I think he does a fine job portraying John Constantine, he isn’t that great in my opinion. The comic book character lends himself more to that of “Fight Club’s” Tyler Durden and even appears to look like Brad Pitt to me. The movie has some dry spots, and some of the action sequences are really stupid. There are some physics related problems that rival some other ghost movies like “White Noise” or “Pulse”. Shia LaBeouf is in this film and while I enjoy his work here, he’s not that great in this role and that might be due in large part to Keanu’s laid back portrayal of Constantine. It seems a bit more reserved than I would expect from the Comics, which show a little more emotion.

Why Constantine is Scary: Constantine is hard to categorize as a horror film. I admit, this isn’t straight forward horror, but it has horror elements. These elements deal with the supernatural more than physical slashing and killing. At this point I will talk about a couple of scary situations that come up in this film, and finish off with the overall bigger picture. So stay with me, as I’m sure I’ll go somewhere with this, sooner than later.

The message that is sent via Constantine, is that religion and religious leanings do not protect you from demonic oppression. We see this in bold with the Priest who tries to drink himself into a stupor to avoid seeing the demons that are attacking him. His cross does not help him at all, and he eventually is killed in a liquor store as the demon doesn’t allow him to drink any of the liquor he is grabbing at. For those of you out there that are religious, or believe that religion or spirituality can help you at all, this should scare you a little bit. It is unnerving to consider that even someone who is esteemed “holy” can not thwart demonic oppression. This is far worse than an exorcist who can not exorcise a demon, because possession doesn’t necessarily infringe on the body of the priest. I know I’m reaching here, but consider the thought. The scenario I speak of for this point is directly related to the liquor store death sequence of the priest who struggles through to his death and his precious alcohol can not save him this time. Is this to also say that alcoholism is not a crutch that can save you from death? Is there subliminal messages being sent through this scenario? No. Constantine chain smokes, drinks heavy liquor and is unharmed. Is this because he’s got a higher purpose? Maybe. However, that is too far away from the initial thought that I’m trying to send across, the focal point of my initial argument is that it is scary to consider that even after you pray, read your bible, and try to seek God, the oppression of demons or even hell can come upon you and end your life, regardless of your commitment. That folks, is a scary notion. 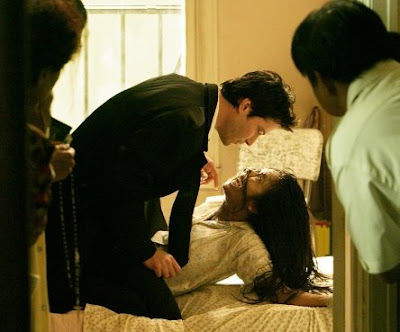 The second scary part of Constantine, is that there are people that can not go to heaven and are rejected by hell. Constantine’s back story isn’t explained too much in this film, and those that aren’t comic book readers won’t really understand why John Constantine is doing what he does. The subplot of the film aside, we are really looking at a bigger picture. Constantine is thwarting the possession of the “Spear of Destiny” from getting into the wrong hands. If the spear gets into the wrong hands, evil will dominate the Earth and bring on hell. I like that subtle and I do mean very subtle reference to Doom 2: Hell on Earth. I’m sure it was unintentional. Back to the scary part, what if you couldn’t go to heaven and couldn’t go to hell? Rather you were stuck in between, fighting evil in hopes of someday being allowed back into heaven, that my friends, sucks and is scary.

At this point, you are probably ready to throw in the towel on this. I don’t blame you. Seriously, I’m trying hard to get this seemingly harmless film into a better light than it gets. Most people pawn this film off as a horrible comic book adaptation. It’s not so, it’s actually quite faithful to the source material, it’s just a little over the top at times. I admit, this movie isn’t for everyone, but if you think about the things that are being proposed here, your imagination can create quite a big amount of fear. That fear is probably not on the forefront of viewers that are watching Constantine, but for the sake of this site I think that Constantine is a scary film.

However, the reason that it doesn’t get a lot of credit is because our society is so jaded on religious and horror themes that this films overall dark tone just becomes another piece of the ubiquitous nature of Christianity in America. I recommend Constantine as a good piece of science fiction with a religious tone, however, I don’t think it’s that great of a film. I think it is interesting on a lot of levels, if you are open to what it has to offer. However as a horror and/or science fiction film it is tough for many viewers. If you’re an avid comic book reader, maybe consider picking up Hellblazer Volume 1 and read some good adult comic book stories with some stellar artwork.