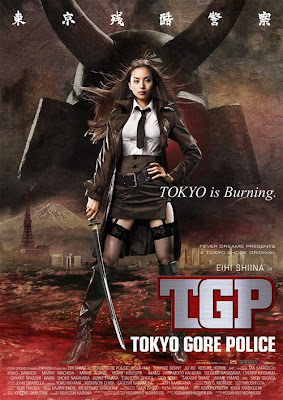 A few months back I put up a trailer on this site for the movie Tokyo Gore Police. I also reviewed a film by the same company called, Machine Girl, and now I bring you a review of the infamous film Tokyo Gore Police!

The movie comes straight out of Japan and it is the most sickening, gore filled, sexualized movie I’ve ever seen. This movie is not scary, and should not be taken seriously, however it has shades of a police state that is more realistic to me than George Orwell’s epic book 1984.

Tokyo Gore Police is about a young woman who is on the privatized Tokyo police force and is in charge of hunting a mutant clan of serial killers. The movie is horrific from the get go, seriously. We open the film before the credits open up, with someone getting their head exploded off their shoulders with a hand gun. We see a close range head shot with a pistol that causes a head to explode into pieces and some of those pieces hit the camera lens, and in full view of a young woman. This is sick, but I couldn’t turn away.

*NOTE* DO NOT WATCH THE TRAILER IF YOU ARE SENSITIVE TO BLOOD and GORE. Thank You.

Here is a trailer for Tokyo Gore Police:

The movie then takes it a little slower through some set up. We get the back story of our heroine and how she idolized her father, and it made her want to join the police force. We also get the story of how her father died.

Then we get some very sexualized sequences involving our main character on a crowded subway wearing next to nothing. She is groped while riding the train, and grabs her molester, walks him to an alley and severs his arms, pulling out an umbrella and walking off screen as the rain is his blood. This image is an insane image and is just the tip of the iceberg as far as Gore is concerned in this film.

Another scene that might tear your guts out, is a sequence involving a half woman half alligator. Her lower half is an alligator’s head and she uses it to bite a man in half, with blood and limbs spreading everywhere. If that wasn’t bad enough, we also see a severed arm with a gun in hand, not able to be fired unless someone pulls the tendon at the end of the severed arm unleashing a bullet that you would believe is a c4 explosive rather than a bullet. This thing shatters the woman-alligator in half and we get blood like a fountain yet again. Oh, this lead in was directly after we saw a “snail woman” and a woman giving fellatio on a man, and then biting the man’s penis off and spitting it out, causing another geyser of blood straight into the woman’s face! 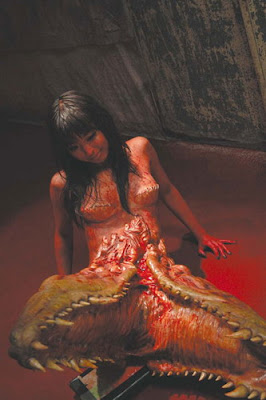 This movie is over the top in the gore department to punishing levels. Sure, Dead Alive, The Evil Dead, and other films have been gory with buckets of blood, but they look like Sesame Street in comparison to the amounts of gore and blood involved in this film. If you saw Kill Bill, and remember some of the arm severing scene’s, you’ll get a mild idea of what is going on with the gore effects in this film.

Is Tokyo Gore Police Scary? : No. This film is completely for a different type of audience. I’m a horror movie fan, and some of the stuff in this film is too harsh for me. But I still enjoy it on an artistic level. There is nice pacing, lighting, and sequencing. The cinematography and set ups to some of the shots are beautiful, and although I’m a little sickened by the amount of entrails and sexualized motives that are shown on screen, I still can’t fault the film for being less than what is advertised. It doesn’t scare me, it won’t scare you, but it might gross you out. This branch of horror is NOT for everyone, that’s for sure.

The film eventually finishes off with an end battle: but by then you’re so disgusted with the amounts of blood spilled, that you don’t really want to watch it again. Tokyo Gore Police is now out on dvd, and I recommend it. I don’t think it’s as good as Machine Gun Girl, but it fits into the “gore” and horror category that is missing in American horror movies right now. I don’t know why we don’t see more American films trying to push the envelope like this type of movie. It’s really a shame.

And here is a little bonus…do you recognize our leading lady? 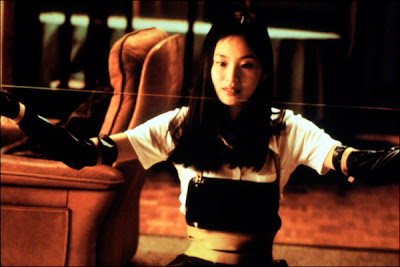 Yep. That’s her. Audition creeped me out too.