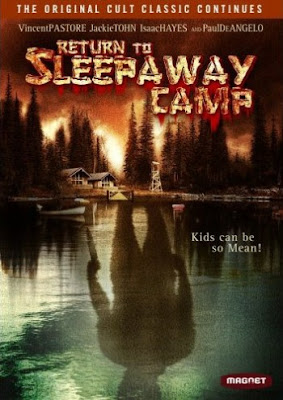 Taking a break from the holiday horror films for a moment, I took the time to watch this film that no one really seems to be giving any credit. In fact a lot of people hate this film and I’ve listened to some podcasts where the producers refuse to watch this one. You know what? They’re wrong and if you don’t give this movie a shot, you’re not a real horror fan either, because you are completely missing something interesting and relevant to the Sleepaway Camp series. So I now present for your reading consideration, Return To Sleepaway Camp.

The film quality is straight to dvd, however, the shots are very good and at times I swear that this film is from the 1980’s because it has a certain flair to it. It’s really a good an interesting tone, it feels new but the shots are old. It actually parallels the original film in a lot of ways and if you are keen to noticing the original film in this series, than you’re going to see a complete update to the original in such a clear way.

The gore levels are elevated, and you see the kill and the result. In the first film we only saw the initial kill and the results, never really over doing the gore levels to anything overall crazy. The sequels were way more graphic sexually and violent. This film was just too close to the original in a lot of aspects and then I realized that the original writer and director and also some of the major cast members that were in the first film are in this film too! That’s right, we get a lot of the original cast reprising their roles in an updated version of this cult classic.

The movie follows a kid that is being picked on like crazy. As the story unfolds we see the campers punishing this kid much worse and worse, eventually a revenge is seen and all fingers point to the victim. Meanwhile our original counselor “Ronnie” thinks that Angela is back and after a visit to the original camper “Ricky” the audience starts to point fingers all sorts of different directions. We get a shocking turn of events, although some might be quick to say that they knew it all along.

Here's a trailer for Return to Sleepaway Camp: 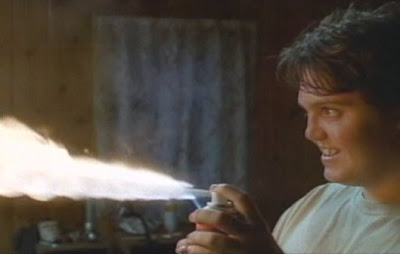 Why Return to Sleepaway Camp is scary:

The original film shocked people with it’s incredible ending, and creepy factors that pushed the film into cult status. This film really doesn’t do the same, however it is is a gift to the original fans. This movie follows the same tone and presence, the performances are similar and the death scenes are updated to current standards. There is even cgi effects shown in this one, but the scary portions of the film are still there.

There are two different scary tones in this film that people miss each time. The first is that teenagers are very cruel and they seem to never learn. The teens treat one camper so terribly, that when the victim reacts by being mean back they go to near blows creating a deeper emotional wound that won’t be easy to get over. Anyone who’s been bullied before will be quick to understand the protagonists plight in this film, as he is misunderstood and reacts to the bullying in the same way that anyone would, with desperation and ill fated schemes. It’s sad that the counselors and authority at the camp don’t do much more than verbally warn the campers to stop picking on the kid. Man, if I had a kid and he was getting treated like the kid getting bullied, I would be mad at the authorities for not stopping it.

The second scary notion is that the various deaths to the campers doesn’t shut down the camp at all. They keep going, and the only major authority around is the sheriff! Seriously? In the movie they know about the original killings and for whatever reasons they don’t shut things down they just keep going and more and more bad things happen.

If you strip the deeper meanings and obvious scary notions of this film, you then realize that if you’re away from home and your friends and/or fellow campers are getting killed in horrific deaths and you haven’t been sent home or are still at the camp, then you are going to be pissing your pants. Consider for a moment that in the original films the campers didn’t know that others were killed, yet in this one they know, everyone knows and everyone has their pick to who’s behind the slayings.

Admittedly it’s tough to get scared by these things, however the death sequences are scarier than you might think. Each individual is scared to death and then killed by a sneaky killer. The deaths are also very scarring. For instance, one of the better scares is throwing a cook into a deep fryer head first! And unlike the original, these sequences are horrific and ridiculous.

Sure, I’m waxing poetic on this film because I’m a huge fan of the original. However, the original had major flaws, including a real life baseball game with multiple innings in the middle of the film. We also had a lot of set up before that final reveal in the end of that film, and overall the tone and film quality was terrible. This film, although updated, is definitely fitting in the style and sequence of the original film and is actually enjoyable. I’d even dare to say that it’s on par with the original and one of my favorite films that went straight to dvd this year. Return to Sleepaway Camp is a highly recommended horror film for those of you that loved the original. I liked it a lot, and you probably will too.