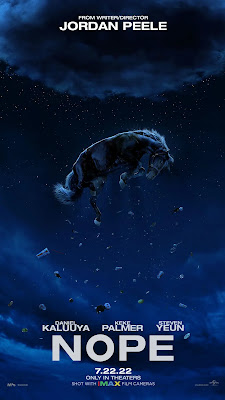 I was at Universal Studios the past week, and was able to tour a set of Nope for a short time. I had no idea what to expect from the movie, nor the set, and it was interesting to see overall. I was fortunate enough to see Nope in Imax, and it definitely was a spectacle. I would recommend seeing movies in Imax overall, the picture and sound is second to none and really immerses you in the movie overall.

Nope, I thought was going to be a horror movie. While there are horror elements, it is not necessarily that, it leans heavily into science fiction and while there are some moments of horror, it really is a science fiction movie with a twist like you would expect from the Twilight Zone or the Outer Limits. Either way, there’s something afoot in the movie, and you’ll get a little lost at first glance.

There’s a juxtaposition in the film that I won’t spoil, but there’s the main plot point and a juxtaposition of another story, and the two work hand in hand to explore a central theme of spectacle. The notion of capitalism and spectacle versus nature is something that is explored in a nuanced manner. The story follows a show horse rental company and disturbances on their ranch. There are several elements that are out of control, including a grid of power that keeps going down, without warning. Over time, it appears that ta UFO is causing the issue, and from there, the story starts to unravel to reveal more complexities over time.

Nope doesn’t have a lot of gore, it is a slow moving movie, and it is science fiction. I cannot stress that enough. I had to explain that to my sister, as she isn’t a big fan of slow burns, and this movie ended up not being on her top movie list to watch this year. She’s a horror fan. After seeing NOPE, I can truly say that Jordan Peele is one of the finer directors in the horror and now science fiction game. He takes on the notion of horror and implements it deeper into story line that features aliens, but not in the traditional sense. There’s a visual design flow that is great in this film, and though there is a limited amount of actors, there’s a lot going on, it is just presented in a slow moving manner. Imagine this like a slow boat ride attraction at an amusement park, with a stellar ending. The third and fourth act is where things really take off for NOPE and you really start to get startled, as the tension builds greatly throughout. The set pieces are great, the visual design is good, and the story juxtapositions itself with ease, making this an interesting movie, and one that you’ll think about long after you’ve seen it. I would see it again, and recommend it to anyone that likes Jordan Peele’s work. This one is a good one.

Sir Jorge Orduna
I'm a happy go lucky blogger and SEO digital marketer with a knack for writing and communications online. I love scary movies, kung fu movies, and music. Drop me a line if you're interested in any of those things. Follow me on twitter https://twitter.com/nocigarzine