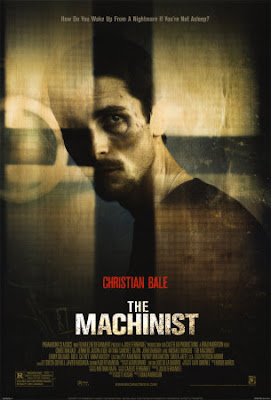 In 2004 a movie came out that would introduce the world, better yet reintroduce the world, to Christian Bale. His amazing performance in this film elevated him far beyond simply a character actor or "American Psycho" and put him on many radars worldwide. Including Christopher Nolan, who has really done great things for Bale in the way that he is now a household name for good acting and a "batman voice". The Machinist is a slow moving, very still nightmare of identity and depression. The film deals with so much in such a little time that it creates a mood that is not easily replicated.

Here is a trailer for The Machinist:

The Machinist starts like many other identity crisis movies. It starts off with a character that is having trouble sleeping. This insomnia takes a part of Trevor Reznik's life to the point that he is losing his mind. He is living in a dreamworld at times and is in trouble at work, as a machinist, because he is directly involved in a machine accident that costs a man his arm. The scene is dramatic and well shot, but it doesn't force gore down your throat, it is done with a sense of class.

The movie moves forward with character development, and Trevor visits a kind prostitute that falls in love with him. I personally hate this idea, but it happens. Trevor then moves forward and visits a friendly waitress at an airport diner, and the movie really moves forward.

Bale's weight loss is the crux of the praise of the film. I really think that anyone that sees this film will be nearly disgusted with the amount of weight Christian Bale loses. This is not a CG effect he actually loses weight to near skeletal amounts for this film. It is an incredible process that demands attention, even when the plot falls apart in the third act.

The film quality is nice. I loved the visuals in contrast to the deep emotional psychosis that Bale evokes with his character. You really start to feel as though you're there, in first person, witness the deconstruction of the mind. It's an interesting take on identity, until we find out that the whole plot and villain are fabrications of insomnia, and that our protagonist is the antagonist and fails to control the viewer's attention in the closing moments.

Is The Machinist Scary? : No. The movie tries to be scary, however it is not. The movie pushes forward this idea that someone is chasing Trevor, but it's not so. There are scary moments in this film if you really think about how far the mind can fabricate things. The scary moments, if any, are surrounded by paranoia and contrast with how lack of sleep could create deep cisterns that will not allow you to function as a human being.

The Machinist seems way longer than 102 minutes. It has a lot of dry moments and feel that some people will fall asleep during this film. The Machinist should be seen by all Bale fans, but overall lit's not the scariest film, nor is it really that good after a few viewings. It's interesting to see how much weight Christian Bale loses, but it's just a novelty.